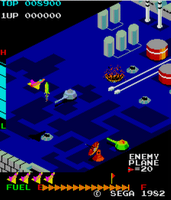 If there was ever a game that should've been remembered for it original and unique gameplay concepts, then hands down that game is Zaxxon. Zaxxon was an arcade space shooter released by Sega in 1982 and became quite popular. The big draw of the game was its isometric view which allowed the player to be immersed in a 3D realm. While other space shooters only allowed the player to move left or right, Zaxxon had a 3D stage setup that allowed you to move the ship in any direction.