Emily takes over hosting duties this episode. We talk about how Marvel became a media juggernaut, also we talk about the benefits of video games in the workplace (i.e. surgeons). We also take a few minutes and answer our audience questions.
Posted by HuBBs at 10:28 PM No comments:

Defender of the Crown ECE arrived.

I am a big fan of classic Commodore Amiga computer gaming.  A lot of my favorite games are on the now defunct line of computers and that's a shame.  However, there has been a resurgence of classic titles being remastered or getting the reboot treatment, it shows that the computer brand has not been forgotten.  Cinemaware was one of the big companies for the Amiga releasing immortal titles like It Came From The Desert, Rocket Ranger, Wings and a few others.  One of their most engrossing games was the Defender of the Crown series. It was a kingdom simulator that had you picking a successor and attempting to unite the rinal kingdoms under one banner.  Sometimes you have togo war, sometimes it was done peacefully.  It was a very unique franchise. 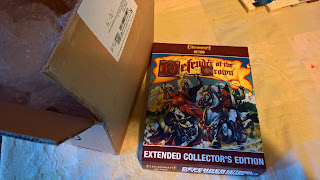 Now a few decades later, the game has been re-released in a fancy big box by Cinemaware.  With it came a box full of goodies  A manual, couple of post cards, stickers, 3 game discs, and a post of the box art.  It also comes with a letter from Sven, the lead of the retro project.  The 3 game discs are multiple copies of the first game.  There's a Amiga CDTV release of the original game which is also backwards compatible on the Amiga CD32 console.  Another disc is for the Amiga CD32 itself but it' actually the sequel.  Why it wasn't properly labeled I have no idea. 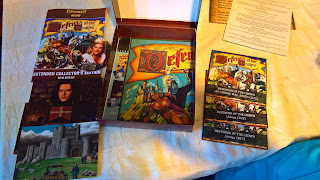 The 3rd disc is the extended collectors edition with extra goodies. It comes with the soundtrack in mp3 format. There is a PC, Amiga CDTV and CD32 enchanced edition of the first game on the same disc with an improved soundtrack and new intro for the game.  There's even a C64 and Mac port of the game on the 3rd disc.  This is one packed disc. Now if there is one thing I could find fault with, its the poster.  Its a very low quality print of the box art blown up to double the size.  The colors and image quality are pretty poor.  But then again I wasn't planning on hanging it up anywhere.

All 3 discs are detected and play just fine on my CD32 which makes me very happy.  I will be replaying this classic in the future and hopefully share my experience on a future stream.
Posted by HuBBs at 10:23 AM No comments:

Keith is the host of this episode. We discuss the 20th anniversary of the US release of the Nintendo 64, the 30th Anniversary of Castlevania, twitchcon and the return of the FGC Corner.
Posted by HuBBs at 10:30 PM 2 comments: