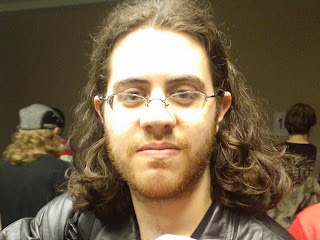 Tell us briefly about yourself.

I've been playing games for quite a while, since a little before the GameBoy Pocket came out. Prior to getting said GameBoy I primarily played games on PC, particularly Megaman X. Since then I've played a variety of games on both PC and the Nintendo portable systems with some of my fondest memories being of Golden Sun and Homeworld. Only within the past few years have I attained a console, a ps2, and since then I have widened my scope to include ps2 and ps3 games.
What do you hope to accomplish with GVN?

For a while now, I've had all these opinions and observations about games, but I felt that no one would be willing to listen to me ramble on about everything I come up with. GVN presents me a chance to do that, and it gives me a chance to get all those thoughts on paper... so to speak.

What is one of your fondest gaming memories?

My favorite memory was a rather recent one. I was playing Ar Tonelico 2 and the party has just found that the passage that they've planned to go through is blocked. So they stop and talk outside of the entrance about what they're going to do about it, potentially leading to yet ANOTHER fetch quest. But then the "dark mage" of the party decides, "Screw this, I have magic," and blasts the cave open, requiring the main character to dive out of the way of the blast. I laugh at that event even now.
Name a game that you were hyped for, but it ended up horribly disappointing you.

The biggest letdown I ever had was Lunar: Dragon Song. There were so many things wrong with that game I want to save an article for it.
What are your top 5 favorite games (in no particular order)?

Grouping series together because I don't want to pick a particular one.