Potential spoilers, you have been warned.

The SMT series has always been an interesting series to play, however one game in particular from the series has stood out to me so far. That game is SMT: Nocturne, probably one of the most interesting games I've played so far. I always say that what makes or breaks anything is the little details and Nocturne has so many little things in it that grab the mind and let you play around. However, you have to be willing to give it this game the thought it demands or else you won't notice the huge amount of work that was put into it.


As usual with the SMT series, the combat is turn based. Particularly, the combat in the SMT series is extremely tactical and most bosses will absolutely destroy you unless you know what you're doing. If you're like me and you put a lot of thought into your battle strategy you can get through the game under-leveled, however this game in particular had some extremely odd strategies that made some bosses completely impossible or absurdly easy. There was one boss who started with no MP and would drain your party of MP in order to cast Megido on you. For those of you who are laughing because you just figured out how to not get destroyed by that battle, you'll have a lot of fun in with this game. For those of you who haven't figured it out yet, my condolences. A lot of thought has been put into the bosses of this game to make them all a unique encounter. You have to think up a completely new strategy for each one.

For all the fun that the boss battles are, I also have to touch on the unfortunate side of the combat system. If you ever decide that you need to grind, expect it to take a long time. It seems to me that the random encounters in this game don't give remotely as much experience as they should. Grinding just one level takes absolutely forever, even when you are currently matched or slightly below the level of the creatures in the are. In most cases, it takes less time to just replace your party with demons of a higher level. (Yes, for those of you not familiar with SMT, you keep demons in a manner similar to Pokemon.) The fusion system has its advantages and disadvantages. If used properly, it can produce some partners with absolutely amazing combinations of abilities. On the other hand, it's a little random at times; one of those mechanics that makes you want a spreadsheet. I personally found fusion to be mostly a series of trial and error experiments.

As opposed to managing the demons, managing your main character is actually one of the better systems of the game. The Magatama system is extremely interesting because of the amount of flexibility it gives you. And since you are allowed to pick what stat increases you get when you level, unlike with the demons, you can tailor the MC to whatever playstyle suits you best. I personally pick a magic blaster whenever I can, but the battles in this game have made me build my MC as a booster/healer. When you combine your ability to pick your stats with the ability to pick what skill you learn next and what immunities you have the tactical opportunities you have are extremely diverse. All of these possibilities allow you to adapt to the bosses of the game in a way that suits you.

For all the work put into the systems of the game the visuals are also well-polished. The MC's tattoos glow and fade, changing from green to red when you get low in health. The particle effects can be rather impressive at times. However, you have to actually think to appreciate some of the visuals in this game. When I finally connected that the teleporter actually was just flying you through the hallways of the Amala network at high speed. I'm not sure if I'm remembering correctly, but the turns taken when flying seemed to vary depending on which teleporter you were headed to. 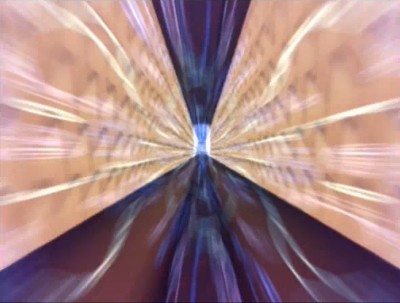 Not that one usually pays attention when moving this fast.

As interesting as that is, there were two visuals in this game that truly impressed me. First was that all the demons had complete animation sets. Maybe it's because I played so many RPGs on handhelds, but I'm not used to battles having the level of animation that Nocturne displayed. Second was that there was a level where the game implemented actual optical illusions. Completely functional optical illusions, too. You could be walking down a hallway only to hit a wall. Be headed to a chest only to find the room next to it is actually a painting. There was even a passage way hidden by a cleverly painted wall. Sadly, the fact that the map was always right took away from the experience a bit. I should challenge someone to make their way through that level with out the map sometime. 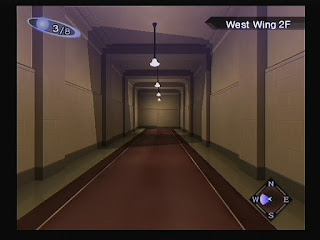 Not in fact a dead end

In terms of plot the SMT games in general tend to require you to make decisions that affect the plot's progression. This one is no exception. In particular, this one makes you choose between different types of power structures. I find this to be rather refreshing since most games these days make you choose between a quite obvious good and evil. SMT is never as cut and dry. I also find that the choices that certain characters made were rather interesting. A few of them would seem out of character at first, but after talking to that character more they begin to make sense. One other thing that I have to say interests me in the SMT franchise is that all of the games tend to have very strong opening sequences. This one ended the world no less than thirty minutes in, how's that for edge of your seat?

I could probably talk a bit more about Nocturne, but I don't want to spoil the whole game for you all. I'll finish by saying that this game is for those who want a tactical turn-based RPG, not those who just want to run around shooting stuff. As long as you like a good mental workout, this may be a game you should pick up.
Posted by LivingShadow at 8:00 AM

Interesting, I've been watching the Persona 4 Anime, and have been itching to play one of the games. I might pick this up if I can find it cheap:)

I am consistently stunned by the measure of data accessible on this subject. What you displayed was all around looked into and eloquent with a specific end goal to get your stand on this crosswise over to every one of your perusers. motu patlu games