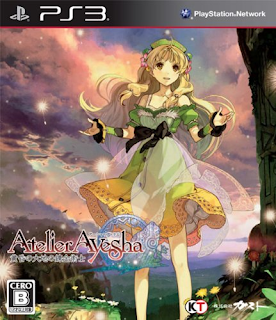 Atelier Ayesha is the second game in the fabled franchise I have played. My first being the unexpectedly good Atelier Meruru.  Atelier Ayesha is now the 14th console release of the long running series and begins a brand new adventure following the heroic fumbling's of our protagonist, Ayesha Altugle.  It is unsure if Ayesha is the beginnings of another trilogy but with the way the series has been going you can bet your money it is.  So what remains to be seen however is if Atelier Ayesha is worthy of living up to the name of the franchise.

And with that answer I have to answer yes and no at the same time.  The game itself is very good in everything from a solid story to some minor game mechanic improvements but it falls flat in other areas like game length and the amount of content in the game.  In many areas Atelier Ayesha took a few steps forward but it then it goes and takes a couple backwards.  One of the great things about Atelier Meruru that made me enjoy it was the amount of things going on from the normal adventure game itself, pleasing your subjects, the robust alchemy system, and town building sim.  Unfortunately, a good chunk of those are either watered down or non existent in Atelier Ayesha.

One of the strongest points of Atelier Ayesha is the story which is leaps and bounds better and way more engaging than in Atelier Meruru.  The plot follows our heroine, Ayesha Altugle, as she grows from a student of basic apothecary into weaver of alchemy and uses her knowledge to try and save her sister Nio.  Her sister, Nio, once thought to have died in a ruin is in fact alive in the form of some kind of spiritual energy and bringing her back is somehow related to the ruins and some glowing flowers. 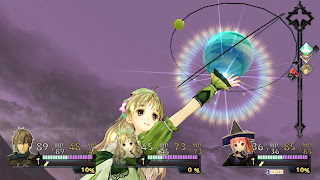 Along her journey she meets and befriends a young wily witch named Willbell, a feisty prospector and longtime friend Regina, the mysterious traveler Keithgriff and many more.  Every character in the game literally screams anime archetypes no matter where you look.  Willlbell is the underage overachieving go getter.  You have the silent and strong characters like Keithgriff and Lucin, then you have Ayesha herself that is a ditsy niave heroine with a heart of gold.

For what its worth however, the personalities actually play to the strengths of the game's story.  All of them have deep histories that you unravel as you go thru the course of the game.  Sometimes you might have to do a couple of acts here and there to progress the story but it tends to be worth it.  The cast is much smaller that its easier to connect to the characters here.

One of the problems I had with Atelier Meruru was the constant interruptions when I would try to move around the main town.  At times I would have as many as 5 or 6 character interactions because the cast had so many people to interact with just for the main plot.  The cast is significantly smaller in Ayesha to where it doesn't become a nuisance when you have a cut scene here and there that interrupts your travels.

Most of these interruptions, or interactions usually involve her companions or NPC coming to Ayesha with a certain request.  Usually involving some alchemy or exploring a location on the over world.  Sometimes these requests are easy to accomplish right away and at times they could take awhile because you either haven't explored enough of the world to get to said location or haven't enough ingredients.

Aside from the interactions with the main characters you also have menial requests from various NPC spread throughout towns that you can fulfill by giving them enough items for a monetary reward.   All these requests have very generous time limits to fulfill those needs of the NPC's.  You can also earn a memory reward which goes towards unlocked memories out of Ayesha's journal which gives her additional stats towards combat or alchemy.

Now the bread and butter of the game (or the franchise for that matter) revolves around the alchemy system that you use to make the items to fulfill the requests of NPC's, fellow main characters or to aid you in your quest.  Now the alchemy system to be completely honest feels a bit easier to use this time around.  Granted you pick up ingredients that are of varying degrees of quality and come with additional effects, but I always seem to make each item without fail and my alchemy levels rises pretty quickly.

This is almost the opposite of what I experienced in Atelier Meruru were you had a percentage based on your alchemy level to possibly fail when creating an item and it took generally longer to level up your skill.  In a way despite having to scavenge for ingredients in shops or in the game world, I did not feel challenged by the alchemy system. 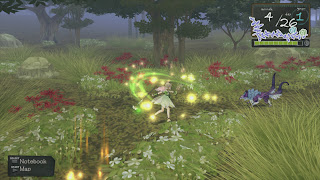 Outside the alchemy system there's still the standard RPG exploration of the world.  Your over world is still basically the same as past Atelier games where when you accomplish certain tasks per area you will unlock new paths to proceed further into the game.  You also run across merchants this time around in the over world and can purchase various ingredients not sold in city shops.

When you enter an area for exploration, you have a variety of landscapes to explore and sometimes the size of the landscape varies.  Some of the areas are a simple straight and narrow path that you can easily run through.  Sometimes you get wide open areas with lots of flora, enemies and excavation spots to dig up ingredients.  As you run around these areas, enemies are still scattered around and easily avoidable.  There is some minor platforming involved as well with the occasional jump here and there to ascend to higher grounds.

By the way, speaking of enemies I am actually shocked by the lack of enemy variety I have fought in this game.  While I am happy that I wasn't battling psychotic squirrels and killer bunnies right at the beginning, I found the new alternative monsters to be rather lacking.  Right away you're fighting off wolves, flying squirrel rejects, and bears.  Later on you fight drakes, slags and some hybrid of mechanical golems and sadly that's what you'll be facing for a great chunk of the game aside from the boss battles.

Now speaking of Atelier Ayesha's battle system, honestly its the same as with previous games.  You have a hybrid turn based combat system with a gauge that tells you whose turn is up next.  The combat is fast and simple.  As always your main character is not interchangeable and only has the ability to use her alchemy tools in battle.  The other two slots do allow for you to change up who fights along side Ayesha.  You also have a meter under each character that build each turn and depending on the situation can allow for a variety of actions.  Some of these actions involve covering a teammate who may be low on health, performing a follow-up attack to another character or using a special ability that's specific to each character.  To be honest the system works perfectly fine and as I mentioned before its fast simple and at many times fun.  If it's not broken, don't fix it. 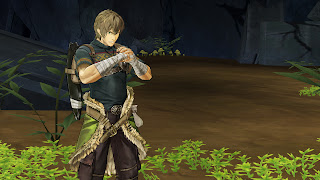 Now I have to discuss the gray areas of Atelier Ayesha which are the game's graphics and audio.  Starting off Atelier Ayesha does look very good for a game that continues to use cell shading to keep in line with its anime centric style.  The models do look good and the colors are bright and cheerful but to be frank I still have the same issue as I did with Atelier Meruru.  The game clearly looks like a Playstation 2 game with sharper visuals.  Now to be honest Atelier Ayesha still looks visually stunning but its a crying shame that the developers couldn't muster anything new besides spell effects to make the game truly stand out more in this day and age of gaming.  Also I am truly confused as to why I see lots of slowdown and framerate drops while running around in several areas of the game.

In terms of Atelier Ayesha's audio I must say it's a mixed bag here.  Several of the games musicals scores are very good, especially the battle music, but why would you go back and recycle from music from past games as well?  On a minor note, I am confused as to why we aren't given the option to switch between Japanese and English voice acting.  Not that the English voice acting is horrendous by any stretch here, but it would be nice to have such an option.  Now while I did say that the voice acting is horrendous is truly is not without fault.  Some of the characters in the same either come off as way to eccentric or sound dull and boring like they are just reading their lines straight through.

With all that being said now I have to address my biggest issue with Ateleir Ayesha game length.  As with the previous games they typically ran anywhere from 20-25 hours depending on how quickly you ran through the game, fulfilling the needs of your subjects, mixing ingredients traveling around the world map and whatnot.  Here the game can easily be done in 15-20 hours.  The Atelier Ayesha's internal clock is actually shorter than the previous entries running for a little over 3 years of game time.

What this really does is force you to streamline and plan through all your tasks in order to best utilize the time you have.  Unfortunately time flies so much faster here whether its picking up ingredients or even traveling the world map.  My first time thru it really caught me off guard with how quickly the game ended.  Thankfully as per usual with the franchise, you have multiple endings which warrants many playthroughs and there's also a new game plus to further encourage you to do so.

Now despite my rants about how watered down the game feels, Atelier Ayesha is still a solid and fun game that is pulled together so well by its story and characters.  The other game mechanics like exploration, alchemy and the combat are still fun enough to keep you coming back.  There's really no reason to not play the latest entry in fabled series and I hope to see another entry in the story of Ayesha Altugle.