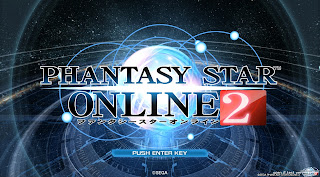 For over ten years I have been waiting for a proper sequel to one of my favorite games of all time.  Between the time of the last iteration of Phantasy Star Online, Sega released the abysmal and poorly supported Phantasy Star Universe and the quite fun Phantasy Star Zero.  Universe left a sour taste in my mouth, while it was graphically superior to Online and had better character control, the game fell flat in many areas.  Mainly poor balance, poor variety of online missions, and lack of fun.  Zero had taken what Universe did wrong and took a few steps backwards.  Those steps backwards did not hurt the game at all as it allowed Zero to be a more accessible game since it was made for the Nintendo DS.

However I have found myself constanly hopping back online with Phantasy Star Online Blue Burst edition.  Just something about the game has managed to captivate me for over ten years which is something both Zero and Universe are sorely lacking.  But enough about that.  We finally got a sequel in Phantasy Star Online 2 and i really liked the direction the game is heading. 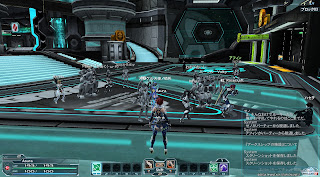 I finally got access to the japanese open beta and all I can say is holy crap.  I am going to take it slow and tell you about my first playthrough from the beginning to the several missions I took part in.  Starting out in PSO2, you connect to dedicated servers which will store all of your character data.  After you select one of 10 ships available you can then proceed to character creation.

Character creation for online games have come a long way with their customization features.  For the original PSO, you had a cast of nine characters to pick from and three classes.  In PSO2 we have a much bigger cast and more customizations than any Korean MMORPG or Elder Scrolls game I have ever played.  You have range to adjust just about every feature of your avatar, from tweaking the angle of their eye brows, to the shape of their body, to even adjust the length of their ears, chins and any other body part you can think of.

After you made your character, you will be thrust into an introduction level that will teach you the basic of how the game plays.  Right away I noticed how easy it was to control and play PSO2 over many other online rpg games.  You can easily switch your gameplay view focus to either behind you or over the shoulder by pressing a simple button.  The over the shoulder view makes the game play more like a 3rd person action game and allows you to have more precise aiming when using rifles.  The standard behind the player view allows you to rotate the camera freely while running about giving you free range to see your environment. 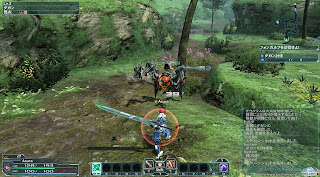 Now throw in some evasive quick dashes and on the fly weapon changes and you have a game that is already looking to be a reciept for success.  The combat itself is very fluid.  You have two attacks that depnding on your weapon offer a variety of options.  One of my favorite weapons already is the gunblade and its ability to switch back and forth between melee and range combat on the fly.  Another weapon, the long blades, allow you to block and take minimal damage from enemies.  Some of the new weapons like whips take a bit of getting use to and can at first seem rather clumsy and useless.

After completing the tutorial level, you have to endure a few cutscenes and then you are brought to the hub world.  Here you can head over to the shops thru a nearby elevator in the center of the plaza.  You can go ahead and meet up with friends on other blocks thru designated elevators that are spreadout in the corners of the hub world.  If none of that is your main interest, you can just go ahead over to the mission desk and start tackling missions by yourself or with a group of people.

Once you reenter the gameworld, you will find an assortment of mision types.  On top of that you will encounter random scenario events which can happen at anytime.  These range from a supply dro off to having to defend a supply ship while it makes repairs.  Some other events invlude wiping out all monsters in an area to be able to continue. 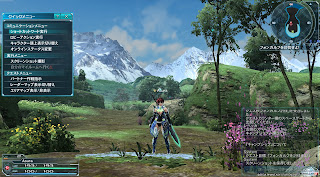 Now granted the beta is in japanes only, I still mamanged to figure out how to use my inventory, which seems to be a major upgrade over the mess that Universe had.  They did bring back the MAG system from PSO and while I haven't fully figured out how to obtain one, I am very excited to see them return.  Overall I am very excited about Phantasy Star Online 2.  Not a day goes by that I can't stop thinking about it.  The open beta doesn't help matters as the hye behind this game is amazing.  I am definitely looking forward to this game.

Now here's some of my gameplay footage to quench your thurst.