The JRPG genre is one of my favorite genres. Well written stories and/or characters (Yes, it is possible to have a bad plot but good characters.), strategic battle systems, and great music all are huge draws for me to the genre. While a good writing can make me want to get to the end of a game, the battle system is what dictates whether it is actually fun to get from one piece of story to another. Unfortunately, some games have absolutely abysmal battle systems which detract from the experience.

The biggest annoyance with the battles, be they random encounters or roaming enemies, is the fact that sometimes the battles take longer to start and end than the battle itself takes. If a player can kill the enemy in say... 2 seconds and the battle takes 5 to load and 5 to process the win (via exp, loot and such) then the player's involvement in the actual battle is about 17%. Compare that to a battle that actually is a decent challenge and the player takes 2 minutes to kill the enemy. In this case the players involvement is about 92%, a huge difference. The lack of involvement combined with the constant switching to battle mode and back is one of the many reasons why people dislike grinding.

Two games I have played have some interesting solutions to the issues presented by grinding. The first is the Neptunia mk2 which allows you to skip the result animation by holding one of the triggers. This reduces the amount of time that the player is not involved in the game and boosts the ratio of involvement which allows the player to feel like they're actually doing something. Another interesting solution comes from Cross Edge, where it allows you to simply tell the game to give you a random encounter. Most games do this by giving you an item that boosts the encounter rate, but allowing the player to access random encounters via the menu allows the game to reduce jarring transition from battle mode to world map and back and I think it is a solution that RPGs should implement more often.

The second issue, as I alluded to earlier, is player involvement in the battle. Particular offenders in this case are summons of various sorts and other cinematic attacks. Cinematic attacks are fun to watch but having to watch the full animation EVERY SINGLE TIME you execute the attack can get rather annoying. One offender in particular is the Knights of the Round summon from Final Fantasy VII where you could get up and leisurely get a snack (or do a set of pushups if you're a fitness type) in the time it took the attack to execute. The most obvious method of dealing with this is to allow cinematic attacks to be skipable. Alternatively, (and I know I'll get flak for suggesting this) is to use quicktime events to perpetuate player interaction while the cinematic executes. In fact, I think this is probably why we have quick time events in the first place. Imagine if Asura's Wrath consisted simply of cinematic attacks instead of quicktime events and then thank the heavens that it didn't.

In terms of real time (or semi-real time) combat systems. There are very few that I would consider bad. The main issue that I have with such systems is that they tend to be of the "mash X to win" type that is so common in beat-em-up games. For this reason, I'm actually not that fond of Tales of Abyss. There's so much mashing of basic attack to do damage. Maybe if I attempted to do a full playthrough using Tear as much as possible, I am a caster-type after all.

One last thing that I'd like to bring up is the system of "training" attacks. The most well known implementation of it was in Final Fantasy II. Requiring the player to execute an attack a certain number of times to level it up can be quite a pain when the number of attacks required usually rather high. I would much rather have the attacks improve by leveling up the character than by leveling up the attack itself. Although, I did beat FFII I got extremely frustrated with it near the end because magic was pretty much useless, damage wise.

The first and foremost is the combat system I've had the most fun with was the system from Ar Tonelico 2. Which I guess is a bit biased as I consider the Ar Tonelico series my favorite, period. What was particularly fun about this system was that most of the combat wasn't actually about the damage you were inflicting with your attacks but the secondary effects that the attacks had, and to be honest, you could probably finish the game with your starting weapon and not have a huge difference in difficulty. Also, on defense you had what can be called a "deflection" defense where you press buttons in time with opponents attacks to reduce/negate damage. All of that together makes for a battle system where you're always doing something and combining that with absolutely epic music and cutscene finishers (that are skipable) produces the most fun I've had in a game since I've started playing. 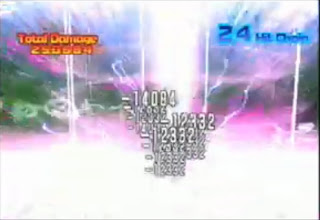 There are also very few games that get to Disgaea levels of damage, that aren't Disgaea.

In terms of amount of thinking required, I enjoyed the semi-turn-based system that the SMT:Devil Survivor series used. Being the tactical player that I am, I managed to beat the hardest path of SMT:DS2 on my first playthrough, possibly underleveled. The SMT series in general has gotten me thinking of a lot of different builds I could try and I'm wondering what the viability of some of them are; specifically, a strength/agility status ailment build. However, that is something for another time.

All in all, there are very few battle systems that I would actually call "bad" (Lunar:DS's system being one of them) but there are a few things that need to be kept in mind when designing a new system. I'm glad to see that developers seem to be figuring out some of the better methods and I hope that it contributes to even more awesome games in the future.
Posted by LivingShadow at 8:00 AM