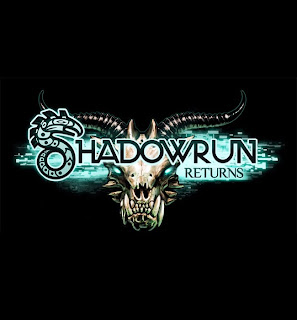 After a very successful kickstarter campaign the wait was finally over for a new shadowrun game from the creative mind of franchise creator Jordan Weisman.  I am filled with excitement and delight to finally have a new Shadowrun game from what feels like eons of waiting since the Super Nintendo and Sega Genesis versions.  There was a Shadowrun game that came out a few years ago, but I pretend that abomination doesn't exist.

For those unfamiliar with the Shadowrun franchise, here's a quick rundown.  The Shadowrun franchise is a series of cyberpunk themed pen and paper games similar to the fabled Dungeons and Dragons franchise.  Shadowrun stories usually consist of a bunch of runners who are mercenaries for hire performing a multitude of tasks from bounty work to hacking into network mainframes.  Despite it's Cyberpunk elements, the Shadowrun series still provides a fantasy element with the inclusion of meta-human species like Elves, Orcs, Dwarves, several types of magical arts and multiple classes based on the classical archetypes. 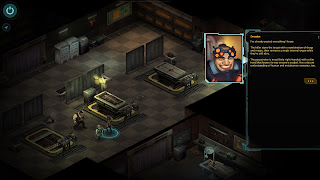 All of these elements fit perfectly in a game and help Shadowrun Returns to be an incredibly versatile game.  We start off of course with a standard character creation and given the option of choosing one of five races and a class with some selected perks.  The classes range from melee style, to distance combat, to magic specialties each with their own unique abilities.  However selecting one class doesn't prevent you from learning and using abilities of other classes.  You have to accrue karma points and spend them on those other abilities.

There is one small hiccup in the avatar creation and that's the lack of variety in customizing the look and feel of your character.  While you can adjust the color of your skin, hair and hair style, there seems to be some finer details here that are lacking.  The character creation kit also is a bit archaic in that it feels like a system used in older PC rpg's like Baldur's Gate and IceWind Dale.

The abilities are the typical assortment attack and summoning spells, physical attacks, and stat boosters.  Some of the more unique abilities and perks include the ability to have controlled drones and the hacking ability.  Aside from these you also have etiquettes perks.  The etiquettes are split up into 7 affiliations like gangs, socialites, security, etc.  Etiquettes allow you to have access to certain conversation pieces which can make it easier to either avoid a confrontation or pay a small fee.

Now while the variety of abilities and perks may seem huge and daunting, I didn't worry about not having enough karma points.  During my play through I was able to build up my points easily just by either saying the right then in a conversation, using an etiquette to my advantage, completing some small side quests or killing some ruffians.  So thankfully I never felt underpowered during my play through.  However, I have felt overpowering at multiple times during the game.  Having the ability to hire runners to form a party doe manage to make the game a little easy when you apply the proper strategy.

Once you finally create your avatar you are thrust into the bleak metropolis of Seattle.  Right away you will notice that the game uses an isometric view similar to other PC rpg games of years past.  Along with this angle you have to also deal with the vision fog which hides off anything undiscovered prompting immediate exploration.  In this exploration mode, you have free range and can interact with the environment and local npc's.  If you are a specific class or have certain abilities you can uncover some hidden items, traps or summon spirit scattered around certain areas. 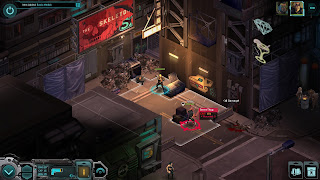 Unfortunately, there isn't much exploration as one would expect in this new Shadowrun game.  Exploring the world is rather linear and you have a limit to what areas you have access to as you progress through the game.  So some areas you won't be able to return to collect missed loot or complete side quests.  Also, while exploring there really isn't much to uncover outside of quest based items and loot dropped by enemy opponents in combat.  The majority of the game in exploration mode has you interacting with NPC's.  You will find yourself reading tons of dialogue as you try to find clues to your objective and possibly get something out of your interactions.

The Combat mode in Shadowrun Returns plays like most grid based tactical rpg's out there. You are given a number of action points which will allow you a set number of actions per turn be it moving long distances, attacking, casting magic, using items, etc.  The number of actions does increase as you progress through the game allowing for more maneuverability.  As you commit to your actions, you are also encouraged to use the surroundings for cover which decreases the amount of damage or getting hit altogether.  The combat system works well enough, however I have found it rather easy at times because of how generous the game is with giving out karma points.

Of course, there are times when it can be quite difficult to hit an enemy with a projectile weapon or magic bringing into question the game's mechanical balance.There's also been a couple of instances with the game remaining in combat mode once combat has concluded.   This make continuing with exploration a bit harder as the game will only allow movement based on your action points.  Despite my bringing them up, they truly are only minor complaints because these rarely occurred during my play through.

The story of Shadowrun Returns starts off with the mysterious murder of a former college, whom hires you via a pre-recorded message to find his killer and receive quite the bountiful reward.  The story plays out like a detective story, as you go from location to location trying to piece together who is behind you're former college's death.  Even after solving that mystery the game continues with a conspiracy plot that leads into a much larger quest.  During the quest you will encounter an assortment of NPC's that can aid you. 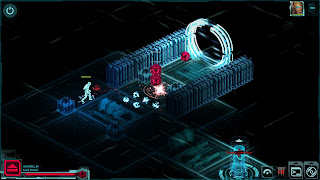 There are a load of unique characters that populate the city futuristic version of Seattle.  Here you have corrupt cops looking for either under the table or out for their own agendas, an orient Madame who owns a whore house in the guise of a saloon, the various gangs of Seattle and a Coroner with a quirky sense of humor.  Each of them have their own personalities and quirks that can make interactions unique dependent on the build of your created avatar.  The build on your character can open up to some unique discussion topics when available, giving you access to more info, better prices of selling wares, or even getting into places for free.

The game's setting is so diverse and intriguing.  It's a shame however that the game is so linear is its story telling that you can only explore so much of it.  Once the main story has concluded that's it, but there is a huge positive that lengthens the game's lifespan.  You are given tools to create new quests and storylines for Shadowrun offering new fascinating new experiences.  This is something that has been done before with games like Neverwinter Nights.  In fact the possibility of some of the board game's story lines can be converted over.  This is a huge plus and I can see endless amounts of content becoming available even before the game's first set of official DLC.

Overall, Shadowrun Returns is the game I have been waiting for.  It only took a couple of decades but it was well worth the wait.  While the main quest is short and limiting with it's exploration, there is still quite a bit to see and enjoy.  The combat is a little iffy here and there but it is quite fun nonetheless and character customization is very deep allowing you to play however you want.  Finally, the biggest draw to make Shadowrun Returns a must have is the near endless amount of content that can be downloaded or created by your hand, extending the life of this game.  For a $15 game, you have no excuse to not pick this one up even if you aren't familiar with the Shadowrun franchise before.