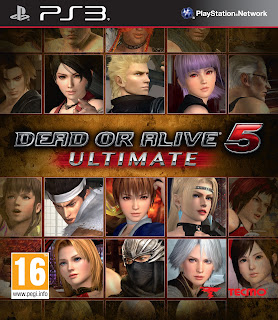 It's been almost a year ago that Team Ninja released Dead Or Alive 5 to the masses.  It's been almost 7 years plus since the console release of Dead Or Alive 4, which graced the Xbox 360 as an exclusive title nearly missing the launch window.  Since then there was not a peep about a sequel for many years because Mr. Itagaki considered DOA4 his opus to the fighting game world.  In the quiet time since the last iteration's release, we have seen multiple releases and ports in the Ninja Gaiden franchise and Tecmo merging with Koei.  It wasn't until Hayashi (Itagaki's protégé), took the helm of Team Ninja development, that a new DOA game would be released.  What we received was Dead Or Alive Dimensions, a Nintendo 3DS exclusive, which was created as a means to test the waters to see if the franchise still had viability. 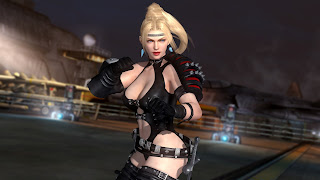 Indeed there was and within 2 years time we received Dead Or Alive 5 for both the Playstation 3 and Xbox 360.  The game was head and shoulders a vast improvement over DOA4 in means of graphics, physics, gameplay and environmental interactivity.  The game was released to mixed reviews but that didn't matter as the fan base was as excited as ever for the latest game in the franchise.  Within a year, Team Ninja went on a heavy promotional campaign to get more people interested in their latest fighter, even sponsoring big money for major tournaments.  So after hearing the responses from their fans, Team Ninja released an updated DOA5 touting more characters, more stages, improved online gaming, and improved gameplay mechanics.

So did they deliver? Damn straight they did.  Dead Or Alive 5 Ultimate isn't just a patched up game with a couple of new characters (Looking at you Ultimate Marvel vs Capcom 3).  From the ground up the game was modified for everyone, even the hardcore and competitive players to enjoy.  This is a game that shows how much the developers actually take into account what their fans want while still maintaining their dream or vision of the game they wanted.  So let's take a moment and break down why this update is so much more than a simple patch job.

Let's get the obvious out of the way.  Dead Or Alive 5 Ultimate is a gorgeous game.  Gone are the anime doll looking character, and instead we have more realistic (sort of) character models.  Obviously the girls of DOA5U look stunning with their graphical upgrades along with their male counterparts.  The detailing is astounding as characters receive textural decals as they fight.  They get dirt, sweat, and water all over them as they fight in the multitude of huge stages given to us.  Each character has a huge assortment of outfits that can be unlocked through progressive play by either beating the offline modes or through the new modified online mode point system.  More on the online mode later.

The stages in DOA5U are huge and full of detail and look even more impressive as they slowly get destroyed, modifying some stages.  There are some new and retro stages thrown into the mix that offer a great mix of gameplay and visual delight.  The retro stages have been given a huge facelift with higher texture qualities, enhanced lighting effects and even some minor modifications.  The new stages feature quite a lot of originality and are incredibly huge with lots of vivid beauty.  The desert wasteland stage stands out the most as it has amazing particle effects with the sand blowing in the wind, and random ruins that crumble to dust as you throw your opponents into them. 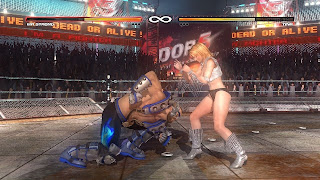 Now despite how stunning the character models are or how awe inspiring the stages are, its really been the unique gameplay of the DOA franchise that has kept the fans hooked.  Dead Or Alive 5 introduced a series of new moves and elements that were more than welcomed.  The new side stepping system was a great way to be able to safely dodge an enemy's vertical attack and catch them off guard.  The Critical burst is a move, that once you meet the right criteria, can cripple an opponent long enough to allow for some guaranteed damage. It accompanied by the Power Blow, which is a chargeable attack that can deal a great amount of damage and can help change the tempo of the match if landed in desperation.

These are joined by a new move called the Power Launcher, which is what it sounds like.  Once you have meet the criteria to allow for a full charge attack, the power launcher can send them flying sky high allowing for combos and juggles.  The new move to be honest is fun and can probably be use in conjunction with the critical burst which makes the already insane combos all the more damaging.

Probably the part of the game that received the biggest amount of attention was the Tag Team mode.  This is a mode that hasn't really received a lot of love since the third game in the franchise.  Even in Dead or Alive 5, it felt like a slightly improved version of the tag team feature from DOA4.  Here they went the extra distance to highlight the fun of playing tag team matches.  There are more options and tactics to be had allowing for flashy and really intense combos.

That's not to say that they skimmed over the one on one fighting mode.  Overall, Dead or Alive 5 Ultimate has an incredibly deep fighting system that is only bested by the like of the Virtua Fighter franchise.  You have a system that allows for a variety of stuns, stages with hazards that can be utilized to your advantage and the implementation of deep strategic mind games. 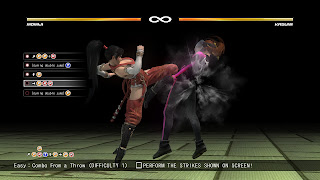 And what better way to learn all these new tactics than in the more improved training mode.  Dead Or Alive 5 in my opinion, had one of the best training modes ever conceived.  You were able to read frame data, move inputs and even learn what attacks hit where.  This allowed you to learn how to punish or work around someone's oncoming assault.  In Dead Or Alive 5 Ultimate, they did keep this system but they've added more.

Along with a robust tutorial and command training mode, they added a combo challenge mode.  The combo challenge mode gives you a set of 20 combos per character to perform in varying difficulties.  You start out of course with basic combos that get you comfortable with your character of choice.  The combos continue to become longer and even difficult with the later ones prompting you to practice constantly to make it work.

As mentioned with the addition of new moves for each character, Team Ninja really went out of their way to improve their already impressive cast.  Each of them has been given a very distinct feel to how they control and fight.  There is a wide variety of character with unique martial art skills that it is easy for you to find two or three characters that you will feel comfortable using.

Aside from the training mode, the online mode received a huge upgrade.  Before, there been issues with bad connections with people even within your own region.  That has been worked on.  The game now seems to detect the type of network connection you have and adjusts, trying to sync better with your opponent, which is similar to BlazBlue's netcode.  While there is still going to be lag, which I encountered playing with people from Thailand and Singapore, it has become more manageable.

The online mode also received a new point system which kind of reminds me of the point system in Super Street Fighter 4 AE.  As you progress in ranked mode, you will accumulate points for both your rank and your character.  As you collect more points you can more easily unlock new items like titles, achievements/trophies and costumes.  The online mode still offers multiple play modes like Ranked and Lobby matches with a variety of play styles like tag, winner/loser stays, and even kumite.  I feel the amount of work Team Ninja put into DOA5 Ultimate is astonishing and I will find myself losing hundreds of hours playing friends, rivals and random people online.

And speaking of unlockable content, there is quite of lot of them in DOA5 Ultimate.  There are well over 200 costumes to unlock along with retro soundtracks, and well over 800 titles to procure.  I haven't seen this much unlockable content since DOA 2 Ultimate back on the original Xbox.  Needless to say, if you want to unlock everything, you will be spending quite a bit of time doing so.  There's even some classic music tracks from prior DOA games, which you can customize into your own soundtrack.

Now if there is any negatives to be had, I haven't found any yet.  There are reports of the Playstation 3 version having slowdown and framerate drops, but I have yet to encounter these issues yet.  Another minor quarrel would be the soundtrack to Dead Or Alive 5 Ultimate is definitely not the best of the franchise.  Some of the stage tracks are rather uninspired and sound slow when compared to the fast paced combat that is commencing.  Thankfully we are allowed to customize the soundtrack, thanks in part to tracks from the older games, to give the fights a more upbeat feeling to them. 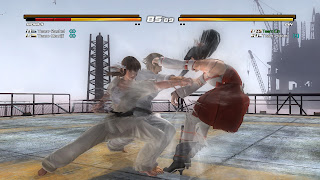 Overall, Dead Or Alive 5 Ultimate is the "ultimate" version of the game the fans have been asking for and Team Ninja delivered.  The variety of modes offered here is unparalleled for a fighting game.  There's more characters, more stages and an improved online mode for all those online warriors out there.  There's a ton of unlockable content that is sure to entice many of the fans of the franchise out there.  Depsite the franchise being tagged with the cliché of being the fighting game with boobs, The depth of gameplay and the improved elements of the game are sure to win over even some of the negative nancy's out there.