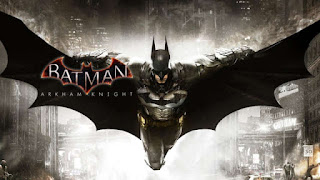 Before writing this review I decided to play through half of the main story and branch off a bit and play some side missions.  I also decided to see what others were saying about the game and I read about a lot of negative things.  Now for those that have already played the game I am sure you may not agree 100% with my review but this review is coming from a huge Batman fan and a lover of the Arkham series.  So now that I have said all that let's get down to business on some things about this game. 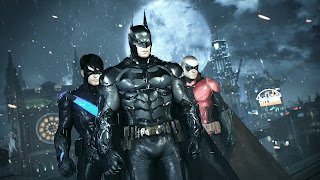 Story:
The story of Batman: Arkham Knight takes place a couple of months after the end of Arkham City which we know is when the Joker is killed by Batman.  The game gives a little bit of information about the Joker and how he was burned after being dead and that Gotham is still up in craze with violence and many thugs running around.  The amount of bad things happening in Gotham has caused the GCPD to evacuate the citizens and try to contain thugs within Gotham City.  That is where Batman is called to help the GCPD.  A lot of the bad things happening is from the leader the Arkham Knight.  I am only half way through the main story so as of right now I am not sure who the Arkham Knight actually is but I know his motive is to take down the Batman.  This great beginning of the story sets the mood for a lot of things to do while in Gotham City.  I feel like because the city is so big and the story starts off letting you know that there is a lot going on that you can easily deviate from the linear main story and focus on traveling throughout the city completing side missions that will explain a lot more of what is going on and even introduces new characters into the story.  For example, I was completing the main story missions when I got a call from Alfred that gave me the option to go travel to another area and meet up with Dick Grayson (Nightwing) and add some more side missions involving him and Batman.  My favorite party of the story in the game is the Riddler.  The Riddler is my favorite villain in DC comics followed by the Joker.  There are 243 riddles, I believe, to find throughout the story and the riddles include the Riddler trophies and riddles to solve by scanning with detective vision, like in previous games.  The best part of the Riddler in Arkham Knight is the side mission story where you are saving Catwoman from the Riddler.  I have dedicated a good amount of time in this side mission because it develops skills you can practice to play through the game and is a blast to do.  I definitely feel like I would play through every side mission and try to 100% complete the game because there is so much to do. 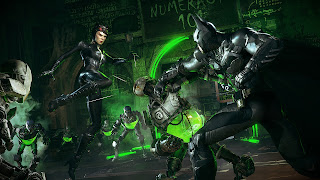 Graphics:
I will be basing this part of the review on the Xbox One version that I have played.  I know that the PC version was flooded with a lot of graphical bugs and I don't want people who play the PC version to think that this review is false in any way.  The graphical powerhouse that the Xbox One has showed me in many games I have played for it didn't let me down when it came to Batman.  The cinematics were crystal clear and I could see so many details in the buildings, facial expressions and backgrounds.  Looking back at playing the Arkham series on my 360, I have come to the conclusion that the Xbox One definitely does not disappoint in the games it has on an HDTV.  The colors within Arkham Knight are on the duller side because of the story taking place during the night while its raining.  However, the Joker and the Riddler are still vibrant in their colors including greens and purple which was nice that it wasn't muddy looking or boring.  Overall, I was completed satisfied with the graphics in the game. 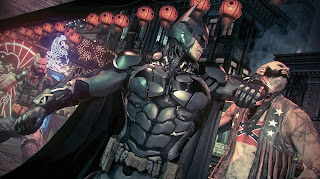 Sound:
The sounds in the game were a see-saw experience for me because although I didn't really enjoy any music elements of the game, the sound effects were on point.  From the batmobile to the batclaw, I felt that the sound effects were amazing and made some of the aspects of the game a bit more enjoyable than other sections.  The actual background music was just ok for me and it didn't hinder a lot of my enjoyment from the gameplay but sometimes I like to have that background music to use as an alert for when you know something is about to happen.  I have always felt like the music can really bring a game together and tie in a lot of elements and this is what has let me down with Arkham Knight.  I felt like this element was really lacking and it was very disappointing.

Controls:
This is where my review will definitely go sour.  I was so used to the controls of Asylum, City and Origins that I went into Knight thinking that everything would be the same and boy was I wrong.  There were some drastic changes in the controls with button arrangements.  You do not use the Left Bumper to Detective vision because it is now on the Up Directional Pad.  I am sure you can change around the controls in the options but I didn't look into it because I forced myself to just adjust and just use the controls that were Default in the game.  But for those that had played the previous series it was a huge confusing change at first and caused you to press the wrong button and have something else happen.  I am really big on playing a game that can have controls that are easy and work smoothly.  The only reason it isn't smooth at first was because I wasn't used to the control layout but after about 6-7 hours of playing I have figured it out.  But I am still made and the learning curve I went through to play a game in a series that I love.

Overall, Arkham Knight has brought a lot of the stuff that gamers and fans loved from the previous games in the series and have even expanded by adding new elements, characters, and ideas like the introduction of the Batmobile.  It makes traveling through the city so much quicker but it is still fun to jump off rooftops and glide forever.  I highly recommend people picking up the game and giving it a try.  It is a lot of fun!

+ Extensive story play
+ Graphics
+ The Riddler riddles (How can you not love these?)