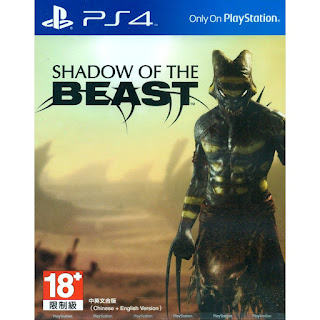 Fast forward to nearly three decades later and we now have a reboot of the franchise released exclusively for the PlayStation 4.  I was put off at first because previews for the game centered on making it look like a 2.5D hack'n'slash action game.  While the originals had quite a bit of action to them, they still had a good degree of platforming involved.  Thankfully, there is a good amount of balance of both elements in the game so my fears quickly subsided. 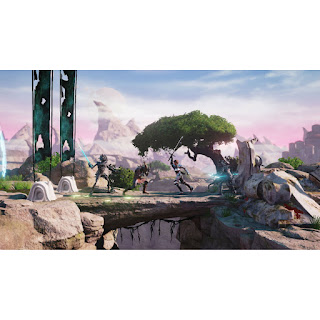 The reboot of Shadow of the Beast is a retelling of our anti-hero, Aarbron aka the Beast.  He is a servant of the evil Lord, Maletoth, and treated like a chained dog on a leash killing whoever he is ordered to.  Fate would have it that during a mission of his lord, that one of the people he killed was his father and he garners enough willpower to free himself from his bonds and go after his enslavers.

The game's narrative is told through with brief cutscenes of Aarbron interacting with the inhabitants of the world.  You can also learn about Aarbron's back story through unlockable flashbacks which you can get by finding the talismans or seals scattered around each level or by unlocking hidden encounters.

Each cutscene usually has Aarbron having a word with various creatures or people speaking in their native alien tongue.  The language they speak can be unlocked to reveal more elements of the story.  I really like how intriguing this multitude of language is and makes the games world really come alive.

The graphics of Shadow of the Beast are honestly a mixed bagged. The game's inhabitants look amazing and some of them are designed to pay respect to Roger Dean, who created the box art for the original game.  The world is filled with tons of bio-robotic looking creatures and brilliantly designed levels that capture a radiantly or darkly alien world.

The levels themselves are crafted with a cinematic flair to them.  At any time, as your scurry around, a cutscene might happen or the game will scale back and give a wider view of the environment allowing you to take in the beauty of each level.  There are some massive and impressive looking landscapes be it inside of ghoulish tree, a maze-like tower, or a massive grave site.

One of the weak points of the game is its soundtrack.  The Shadow of the Beast's music is mostly just remixed or rearranged pieces from the original game which was composed by David Whittaker.  Some of the tracks just lack the wonder or the edginess that the original tracks had.  There are some nice tracks on here for some of the cutscenes that have do pack a minor emotional punch but not enough to help us connect with Aarbron and his cause. 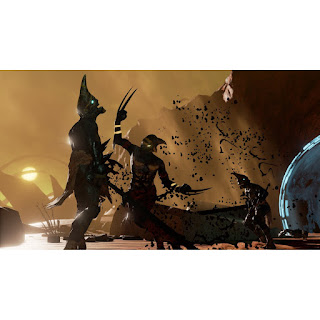 By the numbers, Shadow of the Beast feels like a throwback to classic platformer games.  Kind of like a hybrid of of fundamental old school sidescrollers mixed in with modern gameplay elements.  Aarbron has a number of abilities like climbing, using a gun(acquired later in the game) and a whole assortment of unique combat moves.  The levels are designed in a way to maximize each of these abilities.

Aarbron's combat moves involve some basic hack'n'slash mixed with counters, blocking and even a tackle that can help in refill your health.  The brunt of combat takes place during encounters which have this weird flow to them.  Enemies attack from both sides and you have to plan your course of action based on what you enemies do.  At first it seemed very off putting because the first couple of stages the enemies during encounters were just mindless meat bags that charged to their deaths.

However, later on the game does present a challenge by giving you enemies that can counter, evade or absorb a direct hit.  You will find yourself dying quite a bit once these encounters start to throw all kinds of enemy varieties your way.  At first it seems unfair due to the nature of how quickly the game wants you to react, but eventually you will start to see patterns and develop ways around even the toughest of enemies.

Best way to tackle them at that point is by reading their actions and choosing the appropriate course be it stunning them, blocking, parry, rolling out of the way or using either Aarbron's wrath or Rage.  Aarbron's Wrath is a move that fills the whole screen with spike and deals with your foes quickly.  Rage is a move that is pretty much a self activated quick time event that kills your enemies in glorious style if your timing is on point.  Keep hitting the cues and your will rack up a ton of points as your combo grows.

So with all that said, with the flow of the game's combat and the large amount of abilities, Shadow of the Beast can be very enjoyable at times.  There are numerous encounters in every stage(around 6 to 10 per) and maybe a few enemies scattered around each level at just nuisances.  I would have preferred there would be more enemies scattered around the levels as opposed to a bunch of encounters.  I only think this because there are larges stretches of the game that serve no real purpose other than to force your eyes onto the background even when nothing spectacular is happening.  Some small number of beasties to plague your advances here and there wold have made the game feel less predictable. 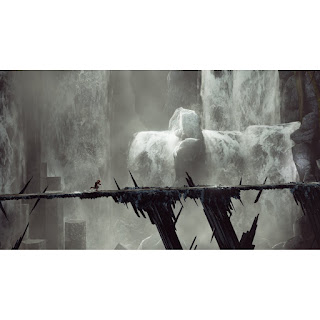 Now all these encounters do eventually have a greater purpose in the form of building up a high score.  The less damage you take, the variety of moves you use, how fast you dispose of them all help build up your score.  The higher your score at the end of a level will then become a form of currency that allows you to purchase tons of unlockables. These unlockables include upgrading Aarbron's abilites, story cards, soundtracks, alien languages translated and the original Shadow of the Beast game.

Aside from the typical upgrade system, these unlockables are pretty neat.  Having the abilities to understand the language of your adversaries unlocks the mystery that the game seems to have.  The stuff involving the classic Shadow of the Beast include a retrospective of the 1990's trilogy, a video showing the original game being defeated, and replacing the reboot's soundtrack with the original's classic tracks.

Overall, I found Shadow of the Beast to be a very worthy reboot of a classic franchise.  The combat might be off putting at first until you learn to read the enemies movements and you develop a rhythm for it.  The soundtrack is a little weak but it does the job for the most part of bringing the world to life.  The extras and unlockable content is pretty good in that it offers clues to a big mystery and paging homage to where it came from.  My last issues is that the game is pretty short but there is tons of replayability with trying to get a better score and buy more unlockable content.  Shadow of the beast is good example of classic gaming getting a modern upgrade and I feel its totally worth playing.