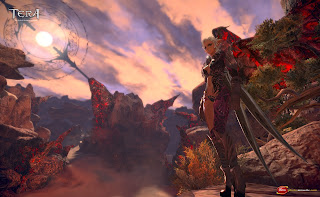 I have been finding myself looking for a good MMO to play lately. I wasn't impressed with Star Wars: The Old Republic after having a playing the beta for a good amount of time. I've played Aion, Star Trek Online, Rift, Warhammer: Age of Reconking, World Of WarCraft, Guildwars, and Conan. I've played multiple Free to Play MMOs like Perfect World, Rappelz, Last Chaos, Shaiya, 2 Moons, Forsaken World and many others. All these games managed to capture my interest for a good amount of time, some more than others. However at the end of the day I would get bored with these games for one of many reasons. Can't find someone to play with, content and quests kept repeating themselves, lack of variety, combat became repetitive, etc. However something about Tera truely captured my interests and I feel that it will change the face of MMO gaming for quite somet time.

While I only had my hands on the timed open beta, I did get to experience quite a lot of what Tera offers. And two of the biggest things that stick out are the insanely gorgeous graphics and fast paced nonstop combat.  Tera's graphics are probably some of the best in any MMO to date.  Tera's world and characters are highly stylized and insanely detailed.  In the Beta, you start off at a base camp that had become under siege.  Even though the surrondings look dull and dreary, for character tutorial environment already looks amazing.  You see a crashed ship before you, bodies of NPC's everywhere, debris litering the beach front.  As you progress, the island becomes more alive and detailed despite it becoming more desolate.  You see a waterfalls, highly detailed mountain sides, and a beautiful stary night sky.

Of course there are the monsters, npc's and player avatars that all look so atonishingly amazing.  Starting off with the character creation, you are giving quite a lot of options to work with in detailing your character.  You have 8 races to pick from and several character classes that offer a ton of variety in how you can approach and play the game. For my playthrough I picked the Elf race and selected the Slayer class.  The NPC's are littered throughout the game and are just as highly detailed.  The enemies you encounter are incredible and come in an amazing variety of shapes and sizes.  Monster designs are among some of the best I've seen in an MMO is quite some time.

Tera's controls and gameplay were deinitely my favorite part of the beta.  ﻿Roaming around with mouse and keyboard is simple enough as always but Tera also offers the player to use either an Xbox 360 or PS3 gamepad.  Almost all MMO's offer no controller support, and those that do, offer minial supper at most.  Tera has a fully intergrated control scheme that makes a good arguement that all MMO's in the future should support controllers.  The only issue I had was with NPC interaction, you have to press the start button and move an arrow around to highlight them.  If there was too many other players or NPC's in an area it can be a little hard to pinpoint what you want to interact with.  The part where the gamepad control shines is during combat.  Its very efficient with having selecting the attacks you want by pressing either of the shoulder or trigger buttons to give you more attack options.

The combat itself is truely the main selling point of the game.  The combat engine is real time combat similar to many action rpg like Kingdoms of Amalur and Fable.  Time your attacks just right and you can easily interrupt your foes.  However you will come across some opponents that are strong enough to continue their attacks regardless.  This is where the ability to dodge attacks is introduced.  You also have an assortment of other abilities that grant you either bonuses or deal more damage.  You can perform chain link normal attacks along with your special abilities into combos with devasting results as well.

During the last portion of my tutorial, the enouncter rate increased so I started to take on more and more attackers.  Soon they were throwing some rather large beasties my way.  The end portion of the tutorial had me fighting a enormous Boss creature with a good sized army of allied npc's.  This segement of the game looked like some from Dynasty Warriors with my screen filled with flying bodies as the boss monster swung at them.  The Boss monster itself was rather agile and moved around rather quickly.  Upon killing him, a giant flying creature attacked and just as the NPC's and myself managed to deplete half its life, a cutscene took place with the monster flying off.

After that, another cutscene took place which showed off some of the game's story line.  NPC's talking to one another about the battle Iw as just in.  After that I was once again free to roam around and explore another island that was the exact opposite of where I started my game.  I unfortunately spent more time just wondering around the little city there and the surrounding grassland just to take in the sites.  After that I logged off.

Overall, my playthrough of the demo was one that definitely gave me a positive outlook for this game.  I know I will be purchasing it come May 1st.  Tera's combat is one that truely outshines other MMO's and the character customization is one of the most robust out there.  The world of Tera is vibrant and alive and teeming with challenges i cannot wait to take head on.
Posted by HuBBs at 11:50 AM