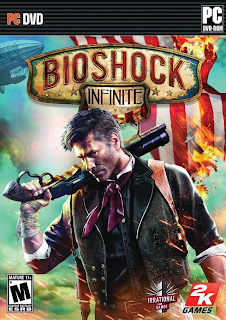 It is very difficult for me to sit here and write a review about a great game which has been out for over a month and come up with something that hasn't been already said.  So needless to say I am going to add to the praise that Bioshock Infinite has garnered since it's release.  From beginning to end, Bioshock Infinite is quite possibly one of the greatest highlights of gaming in the past 10 years.  Everything from the run and gun aesthetics, the story progression and the unique world ripe for exploration has exceeded all of my expectations.

Starting out, Bioshock Infinite is a stunner.  Simply one of the most beautiful games to come out.  There aren't very many games with shy civilizations but at least now developers have something to look up to as an example.  The cloud city of Columbia is like something that is ripped straight from a Norman Rockwell painting.  The districts throughout all looked to be modeled from late 19th, early 20th century architecture mixed with the heavenly bliss of what a cloud city paradise should look like.  Calm, serene, and full of bliss.  The colors are vibrant and jump out at you.  Later when you start to progress farther into the depth of the more unpleasant areas like the underworld Shantytown. 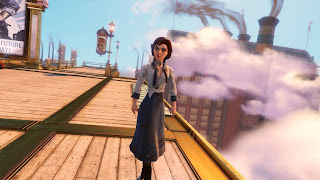 The world of Columbia is also full of life as civilians fill the streets.  There's tons of chatter, quartets singing in traveling airships, hummingbirds flutter around the flowers and a giant carnival filled with games galore but there is a dark side to this paradise.  The world is stuck in a pre-civil war era mentality and racism and religious bigotry is rampant.  While you are captivated at first as you play the game you will start to grow weary of the world you're in.  You can't help but show signs of shock as you run into people who hold themselves high above the minorities of races and ethnicities.

And then we are introduced to our two main characters, the enigma Elizabeth and the self proclaimed prophet Comstock.  Along with our protagonist, Booker DeWitt, they complete a triangle that have one of the best character driven stories I have ever ha the privilege of playing.  Comstock is always seemingly one step ahead of Booker by supposedly already knowing that he will arrive in Columbia and prevent Booker's attempts of leaving the sky city with Elizabeth.

Now Elizabeth is our main heroine whom the entire game revolves around.  Her mysterious past, her innocence, along with her ability to open tears in the fabric of reality allow us to build a connection with her as we progress thru the game in a way that not only makes this a fun escort mission style FPS, but a compelling one as well.  She is so alive and animated that she almost resembles Bell from Disney's Beauty and The Beast while at the same time shows she isn't naïve about how the world works.  We are there as she does things that would seem out of character and shocked at what she does and how she tries to cope.

Outside of the interactions with the man characters, Bioshock Infinite is a stellar game.  The controls are smooth and solid and I can't find any fault with them at all.  For a first person shooter there is quite a lot of exploration and interaction that you would more likely find in a western RPG.  There's plenty of hidden items and mini quests spread throughout the world of Columbia that you will feel inclined to search every nook you come across.  You have treasure chests that need keys to be opened, vigors (elemental spells) spread throughout the game that you learn, and a unique assortment of weapons, and voxophones to be collected that will  just add to your total playtime. 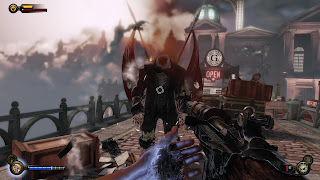 Bioshock's combat is very similar to the previous entries, you have a standard FPS game with magical abilities.  The game still relies heavily on cover based combat but at least it's balanced thanks in part to the help of Elizabeth's tearing ability.  With her tearing she can created bunkers, reveal turret's that aid you in combat and reveal health and vigor replenishment crates.  Also with the amount of enemies you gun down or the Dollar Bill vendors, you never feel like you'll run out of ammo.  The Vigors work practically the same way as they did in the first two games as well.  You have 8 abilities all based on different elements and you can also lay down traps or perform various combinations to effect to easily dispose of your enemies.

The enemies you encounter are very balanced and come in a variety of different types.  You have simple law enforcement and lightly armed soldiers and later on deal with heavily armed foot soldiers and mechanical patriot menaces.  You never feel overwhelmed or in a hopeless fire fight.  They each react differently to the powers you use and some are even immune to certain Vigors forcing you to try other methods or strategies.

Elizabeth's role as you try to escort her out of Columbia was handled wonderfully.  She is easily the best AI escort ever, she lends a hand occasionally by giving you money, health, vigor potions and even providing cover with her tearing ability.  She never gets in the way, never runs ahead of you and never gets stuck anywhere.  Bioshock Infinite has now set the standard for how an escort based game should be.  Of course, the gameplay highlight for me turned out to be the Sky-line segments.  While the main purpose of the sky-lines is to reach other areas of the game, they also make for some unique combat experiences.  Its fast, its fun and some of the coolest moments come from hoping back and forth around the rails and sky bombing enemies.

The excitement of all of this however still pales in comparison to the strong character driven story.  The last couple of hours are a rush and full of emotion that you can't pull yourself away until you are finished.  The ending is one of the most mind blowing moments I have experienced to date and I can't stop thinking about it.  Once you're done you'll find yourself playing through the game again on either a higher difficulty or in the unique 1999 mode.  Overall, this is probably one of the greatest gaming experiences I have ever had.