Ah, the Neptunia series. This is one of the games that I play solely for the dialogue. So many in-jokes, so little time. I picked up Neptunia mkII on a whim some time ago and had a great time with it. So far Victory has been more of the same.

The interesting thing about the Neptunia series for me is that it gave me a chance to watch the experimentation process behind creating games. The original Neptunia was actually quite a pain to deal with mechanically but mk II made some amazing improvements which carried over to Victory. The first thing that I noticed was that the series originally had random encounters, something that I know has annoyed most of us RPG players at one point or another, mk II and Victory replace this with a roaming enemy system so you can avoid battles if you're low on health or otherwise wanting to avoid a fight. Once you actually get to the battles there's also a system to make grinding less painful as you can actually skip the combat result screen. I know that it has annoyed me to no end the fact that when grinding the results screen tended to take more time than the actual battle did. So, by allowing you to skip the results you can not only grind faster but also rid yourself of the aggrivation of waiting to get to the next battle.

The equipment system is more or less as you would expect from an RPG. However, when combined with the fact that combat is turn based tactical combat the fact that you can choose weapons with different ranges is interesting. Although, one character tends to have only two options for range, a small box and one variation on a larger box that changes for each character.

In terms of the combat itself, positioning the characters optimally takes some practice. But it's not really that hard to get a grasp of, just overlap as many enemies as you can with the box you're given. They changed the combo system this time from requiring a set sequence of inputs to get an attack to having a meter fill up to enable the use of combos. I actually liked the former system better, but the change isn't that bad. Where the system definitely improved is in the fact that they've changed to a mana system of sorts as opposed to the "tension," for lack of a better term, system they had in the previous games. Now you enter the dungeon with full mana so healing and buff spells are usable right off the bat.

They packed a lot of systems into this game outside of combat. You have Gust's pet Alchemy system (quick hint: fastest way to get money is to craft any of the "style" items) in order to be able to do something with all these items you're picking up. Then there's the scouting system that allows you to potentially modify the stats of a particular dungeon. And then there's a "game dev" system which is basically custom equipment. Of course there's also a quest system, which sometimes they use to advance the plot. I can definitely see where they were going with all of this, but it seems like they're actually giving you too much to do.

In terms of advancing the plot, it's usually fairly easy. They put markers on the map for the locations of events so you just go to point A in dungeon B most of the time. When that isn't the case you usually have to complete a specific quest to advance. As you can guess, it does get a bit repetitive at times. It's also quite noticable that they're reusing the dungeons, most of the time they don't even try to hide that they're doing so and they'll just reuse the map but spawn different enemies. They are aware that they're doing this and lampshade it in the in game dialogue in an attempt to poke fun at themselves.

In terms of the plot, it's sort of odd. The plot ends up being a weird psuedo-historical plot, including such events as the PSN hack. The whole plot has a gigantic anti-piracy overtone with the main bosses being somehow related to the act of piracy, for example: one of the bosses was known as "Copypaste." Other than that not much can be said about the plot. 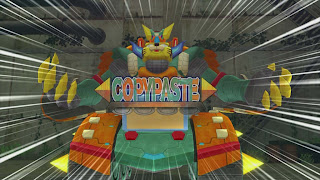 For those of you who think I'm kidding.

For people like me, who are both anime fans and gamers, this game is so full of in-jokes, self-referential humor, 4th wall breaking, and references that it should prove to be a great time. It is more or less impossible for me to list them all but here are a few of the ones that stick in my memory:

Mini-Histy punctuates all of her text boxes with japanese style smilies. Σ(ﾟДﾟ|||)
(as I mentioned in the podcast) A reference to Credence Clearwater Revival
The ability to summon Keiji Inafune for several attacks (which is actually a carry-over from an earlier game)
A reference to Bakemonogatari (see if you can find it)
The several affinities that Nepgear attains 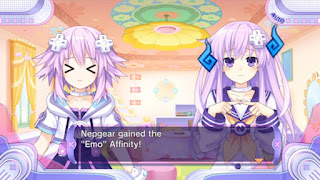 None of which actually do anything.

If you like anime humor in general this game should be a blast, the dialogue alone made me come back to this series repeatedly.

I personally have a great time with this series, but Victory doesn't seem like it really improved much. The reusing of models is a bit too obvious (although I give them credit for knowing it's happening, maybe they'll fix that later). It's definitely a good game, but anyone who isn't an anime/rpg fan will miss quite a few references and probably won't enjoy it as much.
Posted by LivingShadow at 8:00 AM