Potential spoilers, you have been warned. Time and Eternitiy was something that was recommended to me, it is an untested series and may or may not have been worth the buy based simply on the information I had on the box. And while it isn't a perfect game there are a lot of small details that make it interesting enough to be worth picking up if you have the spare time and cash.

The first thing I noticed when I picked up the game was the claim that the art would be completely hand drawn, they were not kidding about that. Everything from the cutscenes to the characters both in and out of combat was hand drawn, probably via tablet if I know anything about how this is done. As such it had quite a large download time when it was first installed.

Due to the large amount of art contained within the game I actually was noticing the measures that the developers used to reduce the amount of art required. Specifically, during cutscenes the characters seem to have a rather limited number of pose sequences that they go through and it gets noticable when they repeat these poses often. However, even with the shortcuts they took it's impressive the amount of detail that they've added to things. For example, on the world map the clouds and trees actually move, and ships sail about. Also, the npcs seem strangely unique. Of course some are simply pallet swaps of monsters and other NPCs but there is actually quite a bit of variation, to the point where you sort of start recognizing them. 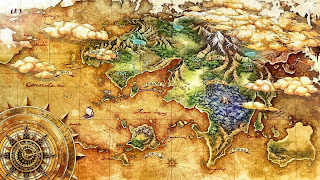 One of the better drawn world maps I've seen.

In terms of the actual gameplay, there are a lot of optional subquests. However, these quests can usually be completed during the normal course of play as long as you pick them up before going into your next area. The areas are rather large, and since a lot of the quests are of the "go fetch X dropped item" and the drop rate seems to be either rather high or guarenteed the quests aren't really that much of an issue. That combined with the fact that the areas are so big (don't worry, there are various ways of fast travel) makes it pretty easy to manage to pick up all you need for the various subquests.

My main complaint with the game is the fact that the story itself is a progression of missions. I would personally prefer to have a logbook to keep track of the happenings of the last story scene. But given that this stucture allows the game to give you money and ability points for things that are rather inconsequential, something I find morbidly amusing, I can see a use for it because standard combat actually gives you a rather low amount of money.

The combat system isn't bad, but I get the feeling that it could have been better executed. I think part of the problem is actually due to the art. Since the art is 2d the fact that the fight is a dynamic psuedo-3d format there's a sort of disconnect so it feels incompatible. For a better execution of a similar style, the PSP's Black Rock Shooter game did it better. Although, a completely different aesthetic style, and the skill system wasn't remotely as good.

The actual combat is actually pretty good. The way that the skill system is structured it's very possible to have completely different play styles each playthrough. My personal favorite is a magic-based build, mostly because I prefer doing a lot of damage at once. However, there is also a way to stun-lock your enemy or mess with their damage output and defense. What I found particularly interesting was the way that magic interacts with itself. For example, using a earth spell followed by a fire spell sets the ground on fire, which causes constant chip damage. The only thing is that getting access to the fun stuff takes some time and doesn't really show up until act 2. In fact, the combat is a little too linear until act 2 because your main strategy is simply to keep firing your rifle while dodging on occasion. Once you get access to a wider selection of abilities the combat gets more enjoyable, but it might take too long to access for it to hold people's attention.

Given that combat is very straitforward in act 1 the story is pretty much the only thing carrying the game. Plot wise, it's very anime, actually to the point of parody. Considering that the first "Boss fight" was against the "Assassins Guild Fan Club" I think you can guess what I mean by that. Given that I'm knowledgable of the tropes of this style of writing I found it amusing what they did with it. However, there are people who don't like this style. Maybe they would consider it too silly, or simply too anime. The plot is also sort of predictable. I'm unsure if that's a problem or not, because even though the main plot is predictable the actual progression of the cutscenes typically isn't. You can tell that the writers aren't taking the plot seriously.

I wouldn't go as far to say that it's a great game. However, there are merits to playing it and you are unlikely to find it a total waste of time. There are a lot of good concepts and it could serve as a good jumping off point for games to come.
Posted by LivingShadow at 8:00 AM