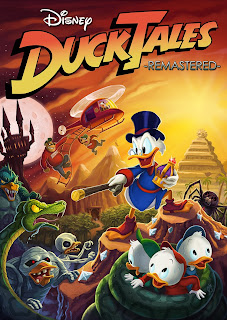 As a child growing up, Ducktales and the rest of the Disney Afternoon shows, were ingrained in my mind.  The cartoon was fun, adventurous and creative with memorable characters.  To this day, I look back at this show with fondness.  The original game was also stellar as well, doing a great job of adapting characters from the show and putting them into a well made platformer that required quite a bit of patience and memorization to beat. 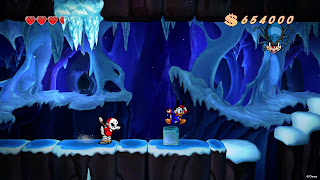 Twenty some years later, Wayforward games gives us a beautiful remake of the classic platformer with a ton of new beefy content.  We get a brand new introduction level, a graphical facelift that captures the essences of the cartoon show, and the voice acting talent to back it up as well.  However does it really warrant us to put down fifteen bucks to this classic game that has been generously glammed up?

Actually it's a confusing yes and no.  For us old school gamers over or around the thirty year old milestone, I can't really recommend this little nostalgic trip unless you're a diehard ducktales fan.  If you are a younger gamer that never had a chance to experience some of the best 2D platformers from the 8bit and 16bit era then I truly recommended it.

Ducktales Remastered is almost every bit the same game my generation played twenty years ago.  Wayforward didn't add any new gameplay mechanics, didn't deviate too much from the original level designs and didn't go overboard with remixing the classic tunes we all knew and loved.

The game's difficulty is still there and now we have the added benefit of saving so we don't have to restart the game after a game over.  This is a good thing too because Wayforward went so far as to re-envision several areas of the game, like the boss battles, that will throw you for a loop and probably cause you start the stage over a few times.  On top of that, we also receive a slew of unlockable game art that we can purchase with the money we collect from the various stages.  We are also given the treat of finally living the dream of swimming in Scrooge's money bin. 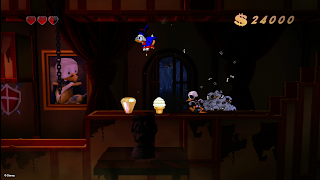 Now there are a couple of complaints but they don't really hinder the game too much.  First, there are a ton of cut scenes in this game.  There's at least 4-5 cut scenes in every stage not counting the cut scenes for before or after the boss battles.  The cutscenes happen so frequently that they do kill whatever rhythm was developing as you play the game.  Thankfully you can skip the cut scenes but that still steals away a few seconds as it restores the game to your control.

The other issue is a minor nitpick on my part, which is the voice acting.  I was pleasantly surprise to see they have brought back the majority of the cast to ducktales reprise their roles.  It still puts a smile on my face listening to Alan Young reprise Scrooge and hearing him converse with his nephews or argue with the Beagle Boys.  However I find that characters like Magika DeSpell and Mrs. Beakley aren't properly represented with their respected voice actor and it comes off as clumsy.  And yes, even Mr. Alan Young seems to not give a great performance himself as his deliveries as Scrooge sound like he is bored or tired of the role.

Again, Ducktales Remastered is a fun game that DOES manage to recapture the magic we experienced of the original from a couple decades ago.  However it doesn't offer us older gamers anything new aside from a facelift and voice acting to draw us in through nostalgic appeal.  For the younger gamers, this is something I truly recommend for you.  Ducktales Remastered offers you a glimmer into the past of excellent game design that in this day and age, seems to be missing.