For a while I have been looking around for a good customizable Mech game. I tried a few others before trying out Armored Core 3. And 3, while dull at times managed to catch my attention.
Verdict Day follows the typical Armored Core release style in that it is mechanically almost identical to Armored Core V. This in itself is not necessarily bad in that you don't have to relearn the control scheme, but it comes a major downside in that it doesn't feel like a new game.

Having played V I do enjoy the improved user interface, as it looks a lot more interesting in this iteration as opposed to the drab world map that existed in V. They added enough color to make the map look more like a computer interface than the very flat map from the previous version. That said, you can tell that FromSoftware is trying to force the multiplayer section of the game because the world map is an afterthought to the multiplayer options.

There is a huge multiplayer stress in V and Verdict Day. However, where V made online pretty much unplayable unless you worked with a team Verdict Day allows you to create your own AI to help out with missions and Online, in addition to the ones the game itself provides. The premade AI is actually rather reliable for once. If you pick the right one it can take on opposing players by itself. I remember getting lucky in a match online and managing to take out four human players with a team consisting of myself and three AI. The only thing is that they do sometimes get stuck in a logic loop and there's not really anything you can do about it during a match. In terms of how much you can actually do with the AI, they system is rather robust. You have multiple decision trees that can be customized to allow for quite a few types of mech. So, it's easy to build an AI that compliments your own abilities.

The multiplayer itself is much better than it was in V. The online-only bosses are available to everyone whereas in V you had to have a viable team to accumulate the team points needed to access the missions. Of course, these bosses would completely wreck you if you didn't come with four human players but it's nice to know that you can at least attempt it.

The multiplayer balance feels very odd, there seem to be several game encouraged builds that have advantages and weaknesses compared to each other. However, in my opinion the power of a lightweight mech with multiple piledrivers is probably head and shoulders above the rest since in most cases it's a one-hit kill and other mech types can have a very hard time avoiding them, especially if you can't confirm where they are before you get destroyed. This can make online matches very frustrating for unskilled players as they may die quickly. At the very least, the match ends quickly and you can get on to a hopefully less annoying matchup.

Balancing with regards to single player is a different story. It seems pretty even with most strategies being viable in at least one mission. Although, good luck taking on the final boss with a sniper build. I had a great deal of fun taking on missions with different builds in order to see how the parts played.

I do have one major gripe with story mode. There are so many derelict cities that it gets really monotonus. With all the maps they put in this game, you would think that they would put something in other than city after city. Maybe a cyber level inside one of the towers? A forest somewhere? Heck, even that level that took place inside a dam in AC3 was more interesting than some of these maps. 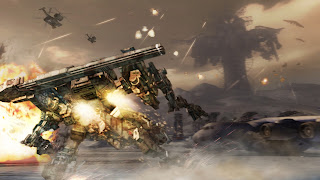 It seems Armored core is suffering from the Brown and Gritty syndrome.

The part list is a little lacking in unique weapons too. The overed weapons are fun, but they're clunky to use that they serve as a gimmick weapon more than anything. I particularly enjoyed the weapon arms in 3 where in exchange for giving up both of your arm slots you got two firing modes. The weapon arms in Verdict Day are rather lackluster and can be summed up as a lightweight version of a heavier weapon.

For as boring as some of this game is, there are some very good boss battles. The final boss was an interesting fight, although sorta one dimensional. I wish it would have changed strategies at some point during that fight. It might be that the online-only version of that fight was originally going to be the final boss but the team sent it to a challenge mission because it was to hard. So far, the issue I see is that there were few bosses that couldn't be easily beaten with a tank build running dual autocannons (high power machine guns for those who don't know) and it seemed anticlimactic to have such an easy time with the bosses with that particular build.

You may have noticed that I have barely mentioned the story so far. That's because the plot is almost non-existant. At least compared to V this iteration has a more interesting semblence of plot. But there's barely any story told and as I mentioned before, I have no interest in the locales that we are using to fight.

As long as you are a fan of Armored Core to begin with you should have a good time messing around with this game. However, new players will get stomped online and will probably find the rest of the game quite boring. Wasted potential, as Fromsoft could have made it so much more interesting. Even some maps that weren't destroyed cities could have pushed my grade up to a C.
Posted by LivingShadow at 8:00 AM