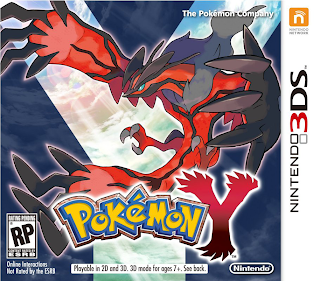 I've had a fickle relationship with the Pokémon Franchise.  I got Pokémon Blue along with my Gameboy Color for Christmas back in 1998.  My siblings and I become heavily engrossed in the game and spent hundreds of hours on it.  I continued with getting Pokémon Gold a couple years later and I will state that out of all the Pokémon games to date, it was the best of the bunch.  I played the Pokémon games that released on the Gameboy Advance but they didn't captivate me as much as the first two.

I started to lose interest in the franchise but I tried giving it one more go when the first game released Nintendo DS Pokémon games released.  Diamond and Pearl were fun games but they failed to not only recapture the feel of the originals but didn't evolve past it's pixel drawn looks.  I wanted Pokémon to evolve with the hardware and sadly it didn't and wouldn't with the next few releases, which I passed on. 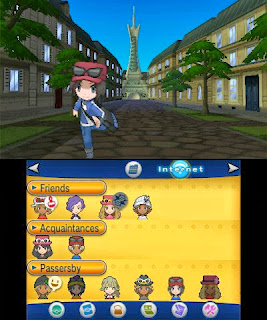 Finally however, Nintendo revealed the Pokémon that many fans like us have always wanted.  A 3D gaming experience we've been hoping for since the Nintendo 64 days.  We did have a 3D style Pokémon game for the Gamecube but it was not the experience fans of the series was looking for.  Pokémon X/Y is the first game in the franchise to go fully 3D giving us what we always wanted.  A fully 3D world ripe for exploration and fully animated 3D battles.  My interest in the franchise was renewed all because of a simple cosmetic makeover.

Upon the game's release I dove right back into the world of Pokémon and I am now once again immersed and enjoying it like I did many years ago.  To be truthfully honest, while the graphics were what got me to return to the series, it's what the game contains that has rekindled my love for Pokémon.   Game Freak has added a ton of goodies in the game that make it the second best game in the franchise as I still regard that Gold/Silver to be the pinnacle of the series.

In terms of gameplay, Pokémon still plays the same as it has for years.  For those who are making Pokémon X/Y their first game here's a quick break down for you.  You travel about from town to town, collecting Pokémon and badges as you go.  As you travel you can battle trainers and wild Pokémon while carrying up to six of your own at a time.  Battles are a turn based battle system with limited move sets that rely on strategy based on the elemental builds of your Pokémon.

On your journey you have adversaries, Team Flare, that try to accomplish their nefarious goal.  You also have your rival that periodically teams up with or challenges you at integral points in the game.  At the journey's end is a series of battles against the so-called Elite Trainers whom you defeat to  become the Pokémon champion.  Upon beating the game you can go about exploring the world with new areas open to you and even play online to trade or battle against others.

This is essentially the formula that has been followed for the entirety of the main series with little deviations with each release.  However Pokémon's transition to 3D is one of it's biggest changes.  Being able to not only travel around in a polygon filled world instead of one full of 2D sprites is a sigh of relief and excitement to long time fan's.  The graphics use cell shading and while definitely not taking full advantage of the Nintendo 3DS' capabilities, manage to create a beautifully colorful world.

The battles are completely animated and fully rendered in 3D cell shading as well.  You can finally see your Pokémon duke it out and see their moves actually fleshed out as opposed to a simple still image bouncing around on screen.  The detail of each Pokémon is also well done, looking just like the anime show.  The detailed background for each battle are also very beautifully done and detailed.  The special effects for attacks range from minor body shaping and mist effects to glorious full screen explosions that look to be taken from an episode of Dragon Ball Z.  The new Pokémon featured in this iteration look very unique and are very well detailed (especially the new Mega Evolved forms) even in their various stages of evolution, assuming the Pokémon can evolve of course. 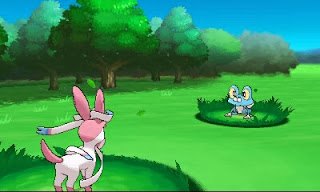 There are a couple of minor details that keeping X/Y from being the best of the franchise but what we have is an incredibly in-depth game that nearly allows you to play however you want.  You can of course follow the old creed of "Gotta catch them all" or just find the Pokémon you want, forming the ultimate team and duking it out online against the world.  You can train your Pokémon through the new training mode mini-games or help your friends out and breed and trade to complete their collection.

The training mode is a soccer style mini that allows you to increase the various stats of your selected Pokémon. This is possibly on of the big time killers of the game as I found myself constantly trying to pump up my Pokémon, making them stronger and more resilient to taking damage.  it' definitely a welcomed addition to the game.  Another neat addition is the reworked Online mode that has 3 lists, the first allowing you to have a friend lists based on the your saved friend codes.  You can also acquire acquaintances from people you have met locally for either battle or trade.

The final list is the world list that lets you either trade or battle various random people from around the globe.  This is a much more manageable and welcomed feature since past Pokémon DS titles required you having a friend code and both of you getting online to be able to connect.  From the several battles I partook in, the online mode doesn't seem to have any latency issues or lag and matches go by just as quickly as if you were right next to the person.

The final new feature I want to mention is the inclusion of Mega Evolutions which allow you to evolve certain Pokémon during a battle making them stronger.  The Mega Evolutions are usually acquired as you progress through the game's story and there are around 20 Pokémon that can use this ability.  Some pokemon, depending on the version you're playing, can have alternate forms giving them different stats and can make some other Pokémon tournament viable if you're into that scene.

Now like I briefly mentioned there are a few nitpicks that I have with the game that does keep it from being the best of the main series.  The first is the clumsily added Wonder Trade feature.  This was suppose to be one of the more interesting and unique features which allow a player to trade a Pokémon to a random player and get one in return.  Kind of like the Secret Santa tradition held around the holidays.  However this feature is plagued by people looking to cash in on people's naivety by giving up common or unwanted Pokémon in hopes of getting more prized Pokémon.  Unfortunately there is no way to control this and it completely demerits this otherwise unique idea.

My second issue involves a feature that was present in Pokémon Gold/Silver and has yet to resurface, the ability to rematch NPC trainers.  In Gold/Silver, you could keep track of a bunch of random trainers and they will call you at random times asking for rendezvous and have a rematch.  Unfortunately this isn't anywhere to be had in Pokémon X/Y.  They give you the ability for NPC's to contact you via the holocaster, but it's only used for the game's story mode.

My third issue is the game's difficulty.  It's the easiest of the entire franchise.  As you journey throughout the game, you gain loads of experience points and your pokemon level up incredibly quicker than they have in past iterations.  You'll be at least 10 levels above every random npc and gym trainer you come across as you progress in the game.  Also, the game has a habit of giving you powerful pokemon in the game quite early like Lucario with the mega evo ability. 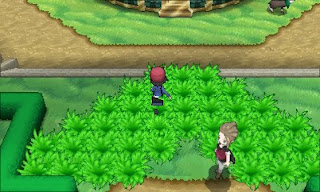 My final issue is more of a nitpick, but I must get it out in the open.  Why do all the Pokémon in the game still have those digitized 8bit squeals but the franchise mascot, Pikachu, is the only one with a digitized voice?  In my mind you either go big or don't do it at all.  All the Pokémon should have been given a digitized voice to go along with their updated 3D looks.  However, it's not that big of a deal and doesn't really detract from the game.

Overall, Pokémon X/Y is the complete package that us longtime pokemon fans have been waiting for.  For newcomers, this is a great way to introduce yourself into the series.  Pokémon is still highly addictive as ever and a game that is sure to steal hours upon hours of your time.  The new 3D graphics are a delight and truly bring Pokémon alive like never before and the new batch of Pokémon is sure to keep those that "gotta catch them all" happy.

really good piece of information, I had come to know about your site from my friend shubodh, kolkatta,i have read atleast nine posts of yours by now, and let me tell you, your site gives the best and the most interesting information. This is just the kind of information that i had been looking for, i'm already your rss reader now and i would regularly watch out for the new posts, once again hats off to you! Thanks a lot once again, Regards, obiee training in hyderabad