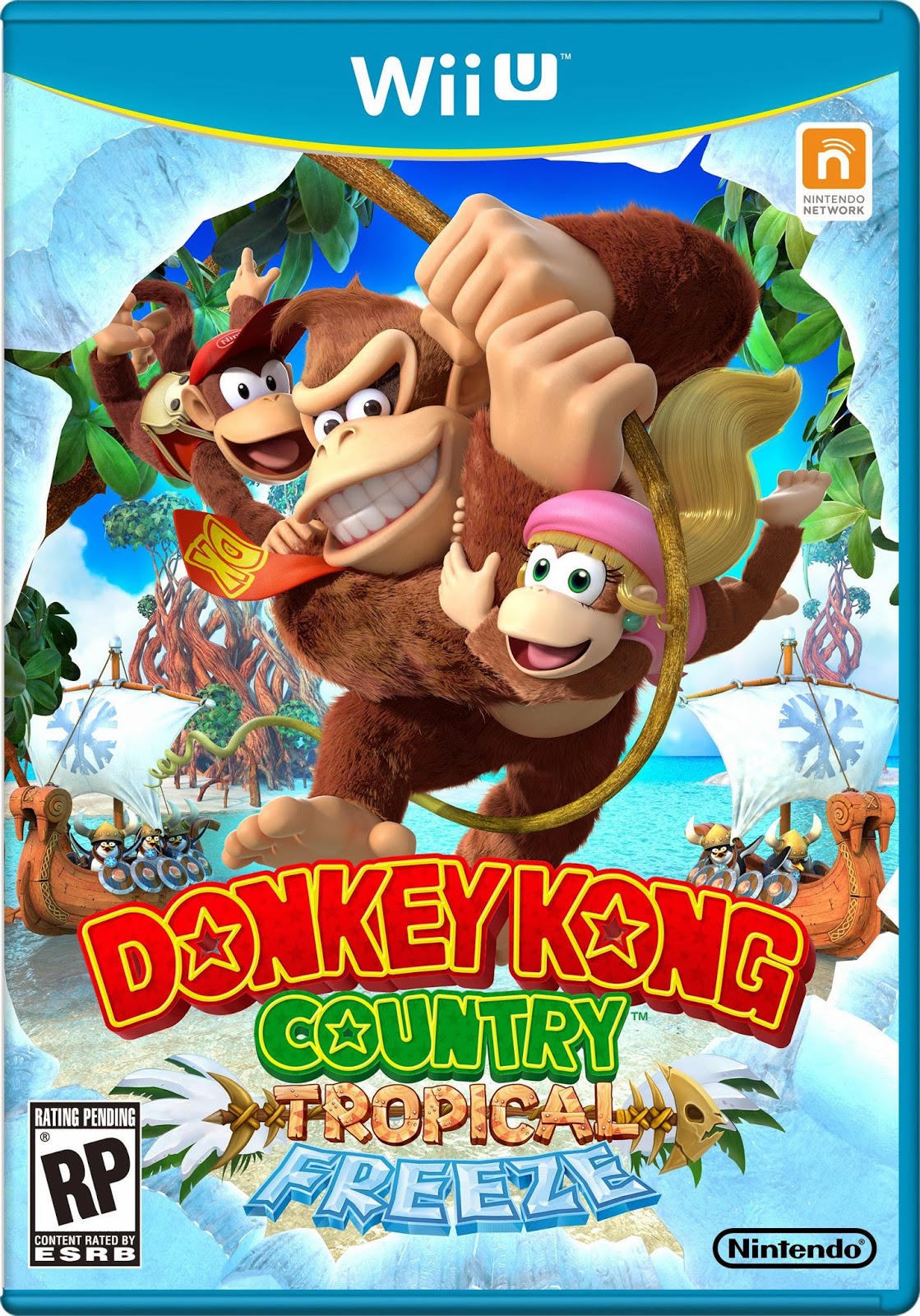 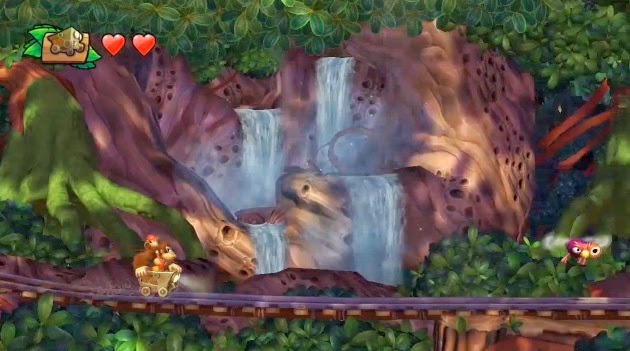 What Nintendo and Retro have given us is a return to the classic 2D roots of the Country series in all it's glory.  Tropical Freeze is a fast paced, non stop ride of excitement and thrills.  The game revolves around an evil king invading the DK Islands and freezing them with a giant magic horn.  Donkey Kong and his friends Diddy, Dixie and even Cranky go out to stop the King and his army of Snowmads.  As per the norm the plot is relatively simple and to the point with slap stick humor thrown in for good measure.  It does the job and doesn't really throw any loops at you.

Playing the game you'll notice that not a whole lot has changed.  There is the addition of a new screen clearing team attack, which to be honest don't really add much to the game overall.  The game has it's multitude of levels that are divided up into zones on a world map with a boss level awaiting you at the end of each Island.  You have your hidden levels, the K-O-N-G letters to collect and tons of bananas to consume.

The gameplay mechanics are still extremely fluid and responsive which is something I've come to expect from the franchise.  Donkey Kong and friends each have their unique abilities allowing them to blast through the levels with ease.  Diddy and Dixie kong both have tha ability to extend their jumping abilities, while Cranky took a book from Scrooge McDuck's playbook with a pogo crane ability.  These abilities allow you in the single player game to fly through stages and easily reach puzzle pieces, secret areas and letters.

The stages are actually rather disappointing despite how much action seems to be going on in the background of the game.  The difficulty isn't really there and the only way you can find yourself dying is through mistiming your jumps.  There is an assortment of vehicle levels like the mine cart stages which bring back memories of the original Donkey Kong Country.  The levels gradually get tougher as you progress through the game but you're still going to have a stock full of extra lives by then because the game seems to give them away. The boss battles are somewhat more exciting but seem to have less difficulty because it's easy to pick up and learn a bosses pattern within losing a couple lives.  The bosses have a whole arsenal of attacks to throw at you but they move at a pace that it's very easy to avoid or the patterns are easily discernible.  Despite these minor nitpicks the game is still very enjoyable with lots of exploration and secrets to be had in ever stage and regardless of easy some of the bosses battles, they are very entertaining.

Probably one of the biggest problems with Tropical Freeze is the multiplayer.  Two players can run the stages together cooperatively but that can be a hassle in and of itself.  You have to really communicate with each other or someone is going to be left behind to die or end of killing you both.  In essence there is really no point in even having a multiplayer since Donkey Kong's teammate of choice can ride his back and still use their special abilities.

Graphically, Donkey Kong Country looks stunning in high definition.  It's great to see the Kong crew in crystal clarity as opposed to their recent Wii outing with it's 480p fuzzy looking graphics.  The detail applied to everything is immaculate from the fur of the Kong crew, the beautiful and very lively environments, and the creatively goofy looking array of enemies.

One of the great highlights for Tropical Freeze is the return of composer David Wise, who did the music for the Super Nintendo trilogy.  The music carries a great tempo that jells perfectly with the level or scenario you are blasting through.  It definitely keeps you feeling upbeat and energized in the game.

Overall, Donkey Kong Country does prove to be a fun worthwhile experience.  It has a decent challenge and excellent gameplay mechanics that will keep you sucked in for hours.  There's tons of secrets and collectable items to be found everywhere.  The multiplayer is the only thing that bogs the game down but as a whole doesn't completely ruin the gaming experience for anyone.  Tropical Freeze is definitely one of the must have games for your Wii U library.