Having played the original Dark Souls and its predecessor Demons' souls I was looking forward to the newest iteration of the series. Overall, it turned out reasonably. I completely ignore the main story in these games as it works better to come up with your own as you play. A lot of lore is hidden in item descriptions so you learn more about the world as you progress. Due to that I pretty much ignored the starting story cutscene. Sure, it was well animated, but it doesn't really play into the game much, if at all. To be honest, I think the game would have been better if it wasn't included at all. That way you wouldn't have that transition to the third person view from the cutscene and the game would potentially flow better.

Overall, I think the biggest improvement they made was to the main user interface. Having the option to let the icons fade away was actually rather nice as it removed clutter from the screen so you could pay attention to other things. However, the equipment and item menu has suffered quite a bit. Even though the change that they made was rather small, I found several rather annoying difference. The first being that you can't see the ability scaling on an item until you actually equip it. Since you have to equip a weapon to see the scaling you end up jumping back and forth between the selection menu and the main equip menu constantly and it really breaks the flow that was so seamless in the original game. Similarly, when examining weapons in the item or item storage menus you couldn't examine their stats. This particularly annoyed me because it prevented me from looking up weapon statistics so I could decide which ones to stow.

The weapons themselves were okay this game. I typically run a dex build on my first playthrough and I was surprised to find out that you only get one dagger per playthrough. Being that it's a simple dagger (as it says in the item description), it makes no sense for it to be as rare as it is. Since it was so good for my build and the new dual wielding mechanics were out I wanted to try a dual dagger build early on. But, I was rather disappointed since there were no viable daggers until around around mid game.

Other than the lack of good daggers, I found that the weapon selection was sort of mediocre this time. You do have the typical selection of types from previous games, but a lot of weapons of the same class have pretty much the exact same moveset. I like playing around with weapons to find what they do differently, but it tends to take finding a unique weapon to change the moveset at all. Even then, the changes tend to be underwhelming. Changing a overhead slash to a stab for instance. I would like more weapons like Ricard's rapier which changed the heavy attack completely. 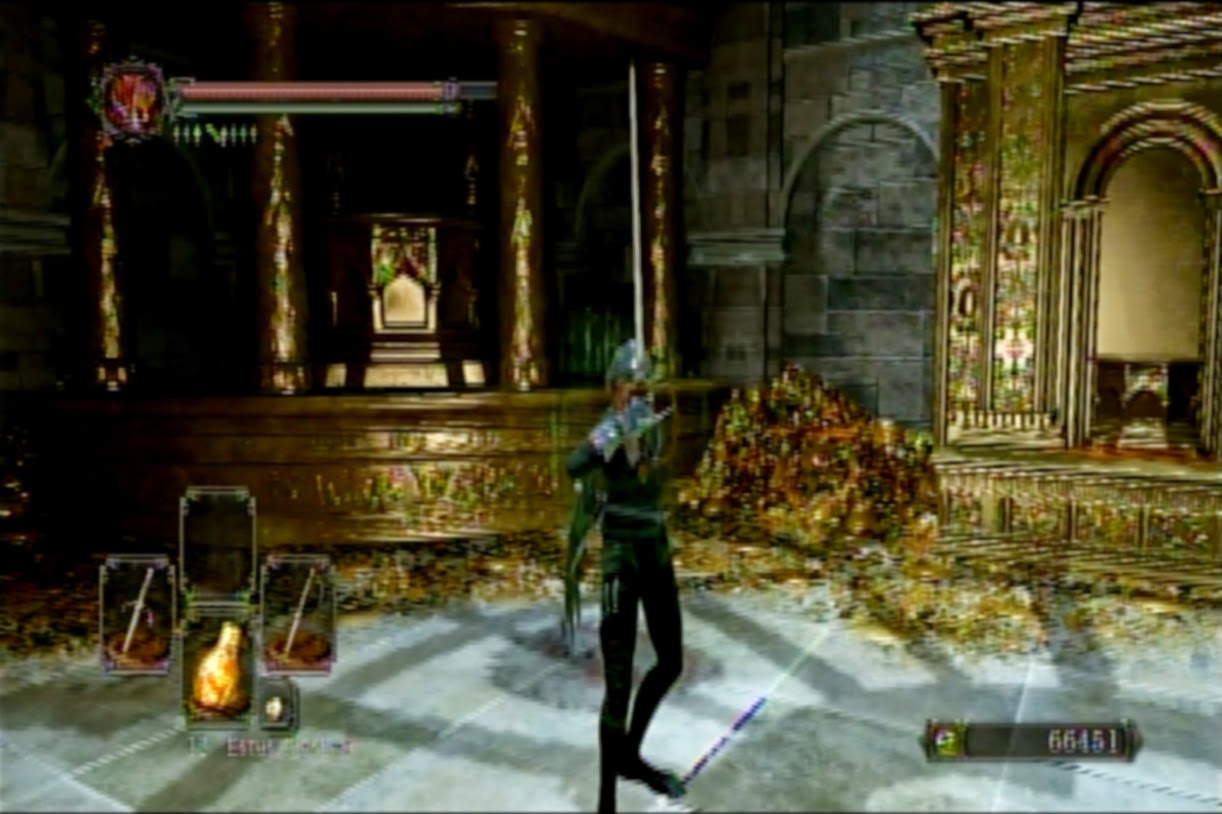 And looking dapper as hell.

Moving on from the weapons to the combat itself, PvE combat is reasonable. The enemy placement isn't quite as evil as Demons' Souls, but that improves in NG+ when they add new enemy spawn points. A change which I consider a huge improvement. I actually like the change to backstabs and the ability to guard break and follow up with a riposte is very helpful for a dagger build like the one I use.

The bosses in this iteration seem to be a bit on the underwhelming side. The old king in particular felt like the design was really phoning it in. I had faced that creature in so many other games that it didn't feel new at all. I realize that fire can at times be a hard thing to create new creatures for as you're sort of limited in concepts. But a demon immersed in lava is pretty much the most basic of the fire bosses. If you're going to make us do that fight, at least make us actually fight him instead of playing footsies the entire time. The covetous demon, even though it was a much easier fight, was a much better boss overall. One good thing is that they mostly stayed away from puzzle bosses this time, with the exception of the optional executioner's chariot.

The world itself was mostly on the okay side, for the most part it didn't impress me. The Dragon Aerie and related areas were probably the best in the game visually. Most of the rest of the areas had potential but didn't really show off as much as they could. The bastille in particular could have looked so much better if it wasn't as compact. 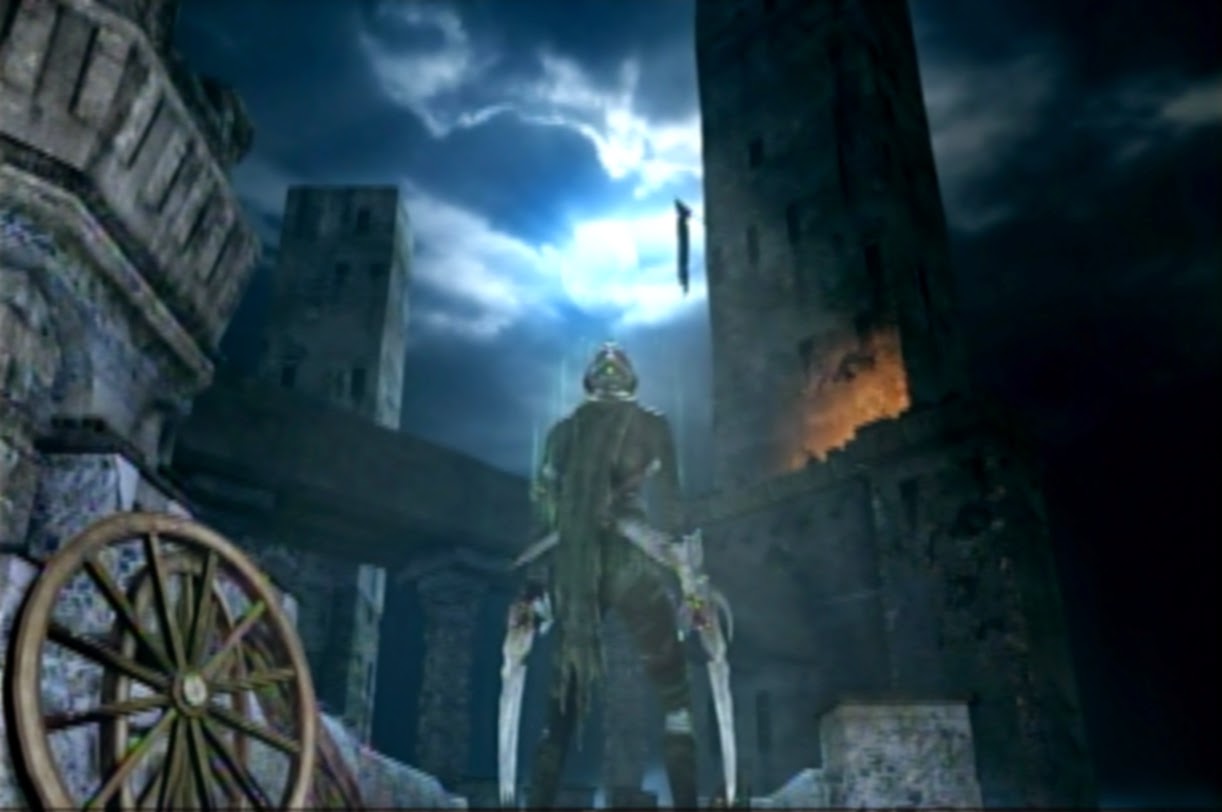 Finally, the PvP. As of the time I write this article, most of pvp is dominated by what was dubbed as the Havelyn build: dual Avelyn, havel's armor, santier's spear. Just looking at that build makes me cringe. Santier's spear has such a wide hitbox while the Avelyn generate so much damage it ends up being a huge pain to deal with. Not that my build is particularly good for pvp, but it can occasionally beat someone who plays too predictably.

For the most part Dark Souls 2 is a decent game. They did improve certain things this time around, but when doing so they seemed to miss carrying over some things that made the other two games in the series enjoyable. Not really a hit and not really a miss, it is still good and fans of the Souls games should have a good time.
Posted by LivingShadow at 8:00 AM