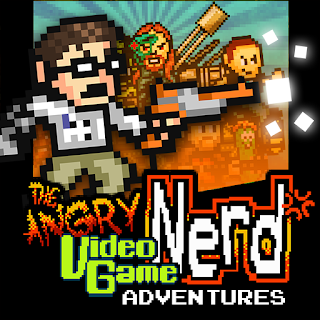 The AVGN Adventures (PC)
Developer: FreakZone Games
Publisher: Screwattack Entertainment
Release: Sept 20th, 2013
﻿
Every now and again a game comes along that no matter what its about, it puts a smile on my face.  Such is the case of the Angry Video Game Nerd Adventures for the PC.  What we have here is a top notch balls-to-the-wall action platformer that along with several other platformers that I have played recently, that the 2D genre is thriving once more. 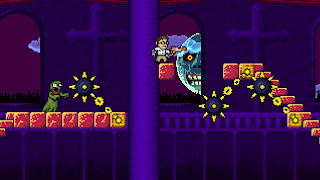 The events of AVGN Adventures follow the quests of The Nerd as he is pulled into the world of bad games and have to save his friend and defeat the unknown evil that pulled him in.  The story doesn't really go beyond the intro and what we get instead are a series of comments from our hero as he shots and curses his way through various themed inspired levels.  These comments are quite hilarious and actually sound like something that The Nerd would spew in his angry rants.  The dialogue is quite hilarious and make for a fun gaming experience.

In fact the dialogue spread throughout the game is quite hilarious and takes shots at some of the most annoying aspects from gaming.  In the introduction stage, we encounter a Navi like character that screams Hey Listen and then instructs us how to play the game.  All the while The Nerd moans and bellows about how annoying she is.  The visual humor is great as well, with little things like killing Santa and then bob sledding down a hill on his corpse.  Even some of the themed stages are just visual jokes, like the Custer's Revenge inspired stage of Beat it and Eat it with it's Atari 2600 graphics and naked ladies in the background twerking.

The worlds are all inspired by a multitude of games that The Nerd has suffered through and they look gorgeous.  There's a future themed level that is heavily inspired by MegaMan, a medieval haunted forest/fortress akin to Castlevania, a snow/ice themed world, and several more levels that are all vibrant and amazing to look at.  The numerous amount of enemies scattered across the levels are also inspired by the number of clichéd enemies that The Nerd himself bitched about during his playthroughs like medusa heads inspired enemies and even characters like the Devil and Rob the NES Robot make appearances to thwart The Nerd.

However despite the visual eye candy, there's the equally amazing soundtrack.  Every stage has a unique track that has a great beat and flow to them.  You can easily find yourself rocking out to these tunes.  My favorite tracks particularly come from the HappyFun CandyTime and Dungeons and ****holes. 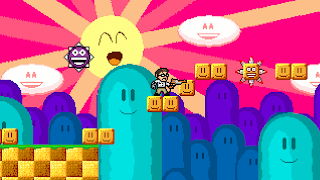 However, the main draw of AVGN Adventures is the non stop heart pounding action and it's intense difficulty.  AVGN Adventures gameplay is similar to the classic run and gun style games on the NES and Super Nintendo like Contra or Mega Man.  Despite the fast pacing of the game it still requires a lot of thoughtful concentration because death is literally every step of the way to the end of the level.

The stages are designed with a good chuck of platforming involved. Timed and precise jumping to avoid the many obstacles is essential.  The biggest obstacle to avoid are the death blocks and they are scattered everywhere.  Touching these means instant death and you start over at the last checkpoint you past.  At time the game forces you to quickly learn on your feet by having some situations that require flash memory and quick reflex like the disappearing blocks or a maze of disappearing/reappearing death block.

All of this does result in a lot of deaths and you will find yourself dying over and over and over again till you can either make the precise jump or maneuver around the death obstacles.That's what I enjoy the most about AVGN Adventures.  The unforgiving difficulty that reminds me of the glory days of classic gaming on the NES, Genesis and Super Nintendo.

Aside from the hair pulling non stop action, there are some hidden elements that add to your experience.  As you progress you can find other Cinemasscre characters like Mother****er Mike, BullS*** man and The Guitar Guy to control.  Each character has their own unique abilities, strengths and weaknesses that make them all suitable for certain situations.  There are also Easter eggs that come in the form of finding hidden characters like the screw attack staff, locating Pickle and power-ups.

When all is said and done, AVGN Adventures is a phenomenal game and I can find myself playing through it multiple times trying to either improve my game time and lower my death rate, or locate all the Easter eggs.  The gameplay is addicting despite being very difficult and the game's visual and score are top notch for a retro themed game. AVGN Adventures is hands down one of the best action platoformers I got to experience and easily stands side by side with other great platformers like Blood of the Werewolf, Fly'n and Cave Story+.