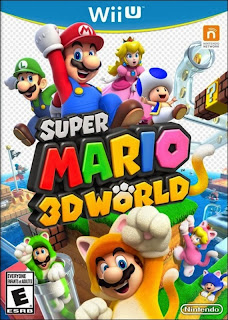 Super Mario 3D Land for the Nintendo 3DS was one of my favorite games on the mighty little handheld.  It's wonderfully designed 3D environments used the 3D effect in ways I actually expected since the system launched.  It contained lots of challenging platforming action that harkens back to the days of Super Mario 64 and even borrowing elements from the classic Super Mario Bros. 3 on the NES.  Needless to say it was a smash hit.

Now Nintendo has released a new Mario 3D game for the Wii U and they added the same addicting multiplayer action that we had in the "NEW" Super Mario Series.  As expected, Super Mario 3D World is a fun and exciting new entry in the famous franchise loaded with a ton of content.  The game's main story encompasses 8 worlds and also lots of included unlockable fun.

As a single player game, Super Mario 3D World is incredibly solid and challenging.  The level designs are very well done and definitely require you to level up your skill as the game progresses.  There are some lopsided moments were the difficulty doesn't seem to exist, like in half the boss fights, but then they throw a rather hard stage your way.  In fact the content post game is definitely the hardest part of the game where the difficulty is ramped up with intense platforming, quick thinking and some re-designs of earlier levels.

The controls are top notch as always for a Mario game.  It feels like a cross between Super Mario 64 and New Super Mario Bros.  The new cat suit is a ton of fun and allows you to pretty much run around an entire level exploring every corner and finding any secrets.  The tanooki suit makes its return and continues to be a blast just as it was in Super Mario 3D Land.  The game offers so much variety to be played however you want.

The use of the Wii U gamepad allows for some unique gameplay.  Touching the screen can allow you to collect coins and reveal invisible items hidden throughout the game.  You can even blow into the mic for certain segments that come late in the game.  The gamepad definitely separates Super Mario 3D world from the herd of run of the mill platformers.

One of the other great aspects is the inclusion of the Miiverse that intergrates wonderfully with the game.  With each time you load the game, you will find new Mii's scattered the world map showing off posts of achievements, helpful advice and even just goofy stamp photos.  There is also the fun ability to race up to 3 other ghost Mii's which can also help reveal shortcuts, pro moves for speed runners, or even the location of the secret stars and stamps.

As we've come to expect from the Mario franchise, the graphics and score are truly top notch.  The familiar tunes from past games are littered everywhere along with new scores that flow wonderfully with the games varying stages.  The graphics are still rather cartoonish is style but thanks to the HD output of the Wii U, Mario has never looked better.  The stages are huge and colorful with lots of detail and amazing special effects.

Overall, Super Mario 3D world has turned out to be the most essential game for Nintendo's already struggling Wii U platform.  Super Mario 3D World delivers top notch gameplay, challenge, multiplayer fun and longevity.  You need to get this game.  Once you pick it up it's hard to put it down and you will be playing it for a long time to come.